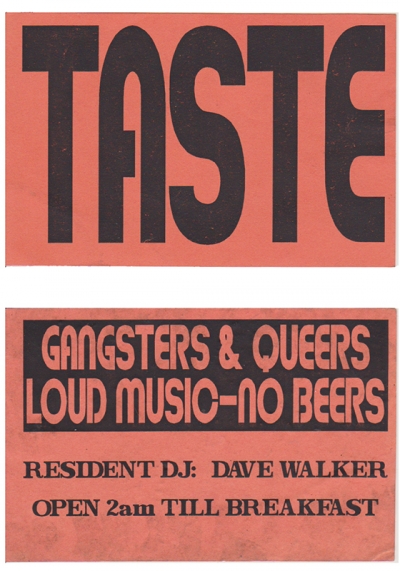 Taste was an early hours cafe on the ground floor of a recording studio. Corner of Hulme St & Cambridge St. It opened at 2am, so we used to pile back there after the clubs kicked out. It was a good place to meet up, see if there were any parties going before we headed back to Hulme. We'd often stay there until it closed. They had DJs, lots of wide awake faces, a few characters. No bar licence. When they opened they did food but I don't think that lasted long. Tea & Coffee were all most could manage at that hour. So we talked and danced and waited for daylight.


We received the following from the owner of Taste

I leased the whole building then sublet to the filling station crew with Dom as chef . Tony Wilson used to come there. we fell out with Phil who owned the filling station and then Kim the chef who thought of the name TA~STE which was an acronym for TAKE AWAY STAY TO EAT. but they market for steak au poise was limited LOL so when they was struggling I took it over and did a greasy cafe during the day then a rough as fuck gay bar from 2 until the cafe opened for breakfast. there was often a lot of party heads still in when the bacon butty workers came for brekky. Dave was a star Dj there (upstairs in the music studio live room ) it was hammered Thursday fri sat there was an unwritten law of truce there as cheeetham hill and the gouch close gang both used to frequent it even if there was a lot of pink ponds getting spent . we sold tea and coffee only but the dibble shut me down as people were bringing there own in and lots of drugs (MDMA coke weed party stuff. surprisingly not a lot a trouble there
Artefact added : 25th October 2021
by albaker 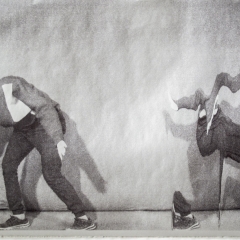 Markus Says –
Sounds like a magical place, thanks for sharing this memory. Also love the slogan: Gangsters & Queers, Loud Music No Beers, ha.
If you'd like to leave a comment, please Login. Login
Manchester Digital Music Archive is licensed under an
Attribution-NonCommercial-ShareAlike 4.0 International License.
Charity no. 1164179
Our archive currently contains 3831 Bands, 752 DJs, 1454 Venues, 303 Industry Professionals and 29440 artefacts contributed by 3987 members.