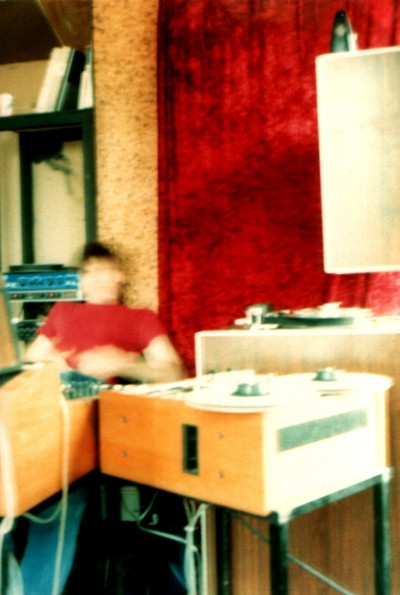 Sound Engineer -Dave Pringle manning the desk at Bootleg Studios in Reddish..Bootleg was run by Roger Salmon who I think was in a group or act called Kane and Abel.(60s or 70s)
The Studio was built over an old sweet shop ,the control room
was conected to the recording room by a firemans pole.
Lack of air conditioning meant Roger often used to be sat at the desk in his Y fronts whilst his wife served up a full sunday roast
on the mixingboard..pic taken during Biting Tongues Feverhouse
album.
Artefact added : 22nd January 2008
by graham

dave Says –
Roger sounds like an interesting fella - found this about him on google...

Was all Feverhouse album mixed here or did some take place at Spirit?

graham Says –
Wow some salmon archive tunes ..thanks for that!
yes some feverhouse was at spirit

philplatt Says –
Wow, my earlier question is answered, however, the facts are not quite correct, it was actually me who built the studio at Rogers "Big Top toys" I used the wood from Elsie Tanners "Western Front" Boutique, Roger was not sole owner as I was 50% partner (and he was the sleeping one at that) the few sessions he did record were all caberet stuff, it was also myself who bought the gear from Revo as Andy Mac was a mate of mine (That will be why Biting Tongues had to use Bootleg mid album because we had the Otari 8 track machine!), all the punk and rock stuff was mostly booked in by Bruce Mitchell and was recorded by myself, in actual fact nobody wanted to use Roger as he had lost much of his hearing and monitored on the threshold of pain. I originally met him through Tony Roberts and Chris Gill over in Whalley Range, at that time he was in "Uncle Rotters Pigbin Band" we later teamed up to form "Earthbird" an all original band playing songs penned by myself (this would later become "The Ride

graham Says –
Interesting stuff,Builds a picture of studio life back in the early 80s. We probably booked Bookleg originaly through our producer at the time Stuart James .I remember we did some stuff at Tony Roberts place in Ancoats ,(Relentless Studios)
If you'd like to leave a comment, please Login. Login
Manchester Digital Music Archive is licensed under an
Attribution-NonCommercial-ShareAlike 4.0 International License.
Charity no. 1164179
Our archive currently contains 3683 Bands, 733 DJs, 1340 Venues, 233 Industry Professionals and 22657 artefacts contributed by 3698 members.