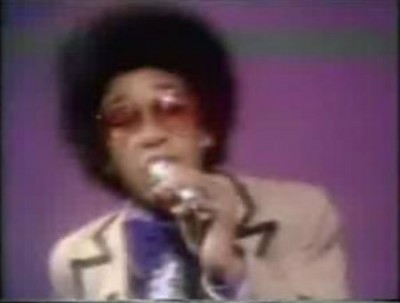 Photo of Marcel King singing as part of Sweet Sensation - 1974.

Totally unsung, Marcel Neville King (1957 – 1995) was indeed the genius vocalist behind two great British soul records, both happening ten years apart and out of Manchester . He was 16 years old when the Manchester based octet, Sweet Sensation, topped the charts with ‘Sad Sweet Dreamer’ in 1974. After a few more minor hits and a period of silence, 1984 saw Factory release the awesome ‘Reach for Love’.

Sweet Sensation under the guidance of Tony Hatch (not only the man who gave us the Crossroads theme but the genius who wrote the belter that was Petula Clark’s ‘Downtown’ which sounds a bit like Sad Sweet Dreamer - anyhow I digress but if you get a chance, google Hatch to find out more revelations), signed to Pye Records. Their second single, ‘Sad Sweet Dreamer’ went to UK number one record in September 1974.

1984 and the Factory 12 inch release of 'Reach for Love' - I read somewhere that Rob Gretton found Marcel sleeping homeless in the back of a car. Record produced by the Bernard Sumner/ Donald Johnson, Be Music/ Dojo music axis - so it says - giving it an electronic based powerful rhythm and bass line riff possibly influenced by Giorgio Moroder with its repetitive and demanding sequencing. Be interesting to know if they were looking for this sound and mechanising it more. I reckon the song is certainly a precursor to the rock/dance crossover genre.

Don't you think that the vocal range and control on ‘Reach For Love’ was exceptionally high level, both from a technical and emotional stand? Why has no-one covered this song since?

I was fortunate enough to sit in on drums one evening on a version of ‘I Heard It Through The Grapevine’ when he showed up at the Lloyds pub in Chorlton - 1993/4. He sang with the resident band which included John Scott on pedal steel. He spoke that night of going back into the studio and recording more songs.

Sadly, the incredible talent that was Marcel King never produced any more records. He died in 1995 aged just 38.

Anyone else got more pics and info about Marcel King?
Artefact added : 23rd January 2008
by dave

one summer Says –
Great piece on a great artist, I only heard of him through the Palatine Box set and RFL is still one of my fave tunes. Me and the missus ended up at a house party in Hulme after an alldayer back in the 90s and the girl running it claimed to be his niece.

deadhead Says –
was rikki patrick in this band

giraffe Says –
im actually a good friend of his son who is a great person. i didnt know this was his dad until id known him for a year or so and he told me his dad sung Sad Sweet Dreamer and told me about his brother Zeus who passed away a few years after his dad. considering the stuff hes been through hes a great laugh, a great friend and a credit to his dad who im sure would be very proud of him!

Denise Southworth Says –
Rikki Patrick only joined the band in 1975 after Marcel had left and their glory days long behind them .
If you'd like to leave a comment, please Login. Login
Manchester Digital Music Archive is licensed under an
Attribution-NonCommercial-ShareAlike 4.0 International License.
Charity no. 1164179
Our archive currently contains 3734 Bands, 739 DJs, 1424 Venues, 261 Industry Professionals and 27929 artefacts contributed by 3861 members.