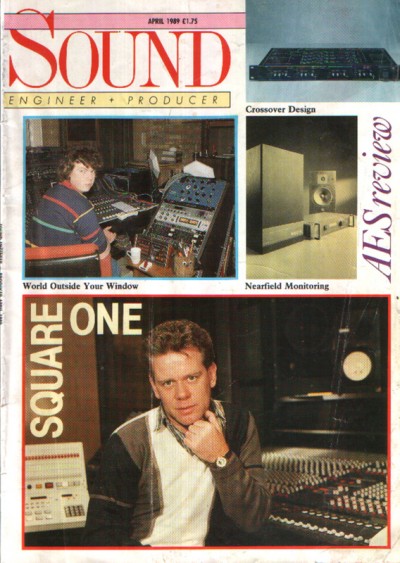 After another clear out in the cellar I found this copy of Sound Engineer and Producer...april 1989.
The man on the cover is Trevor Taylor who ran Square One Studios in Bury in the late 80s early 90s.
many MCR bands used it as it was a pretty descent studio back then..Inspiral Carpets recorded their Joe EP .808 State did the 90 lp and MC Tunes lp,PJ Proby.
I think the Stone Roses had a hand in buying it off Trevor in the mid 90s when it became the Rose Garden for a short time.
Steve Boyce Buckley was the engineer,And a certain D. Gough was a tape op at one point.
Artefact added : 31st January 2008
by graham

Retro Says –
Square One opened its doors in November 1984 with a party hosted by Peter Skellern. Trevor Taylor built the studio after his previous studio SMILE, perished due to a fire. Square 1 became a popular venue for both local bands and those with successful careers. Take That recorded some of the TAKE THAT & PARTY album there & Liverpool bands The Christians & Black were also regular clients. The latter gave the studio & engineer Steve Boyce-Buckley several gold discs. SQ 1 housed two studios, both with Salford company AMEK consoles & a programming/pre-production suite, remaining busy up until its closure, due to financial difficulties in 1993. P J Proby did indeed record there with the Manchester based SAVOY records & Damon Gough [Badly Drawn Boy] was an assistant for a few years. The list of clients is too vast to mention though also included the late-Paul Young [Sad Cafe/Mike & The Mechanics]. It re-opened as Rose Garden studios though as to its proprietors I am unsure. The building is currently a dancing class studio though still retains its Square 1 logo at the front. Trevor Taylor now resides in Florida whilst Steve Boyce-Buckley is still active within the industry.

Nyquest Ltd Says –
I had a part time job in the early 90's for Royal Mail parcels one of my deliveries was Square One.I went in a few times with parcels then Around 93 I had a parcel for The Stone Roses I was a big fan I went in one day & they were jamming they let me hang around for a while. Couldn't believe my luck.Straight after that I enrolled on a course at Spirit Studios studios. That was a turning point for me I'm not an engineer I am a now video director making live music DVD's for labels like Universal & working directly for bands.
If you'd like to leave a comment, please Login. Login
Manchester Digital Music Archive is licensed under an
Attribution-NonCommercial-ShareAlike 4.0 International License.
Charity no. 1164179
Our archive currently contains 3768 Bands, 739 DJs, 1429 Venues, 290 Industry Professionals and 28044 artefacts contributed by 3880 members.