Johnny Martin and the Paiges, The Paiges
Poster
Victoria Theatre
18th May 1963 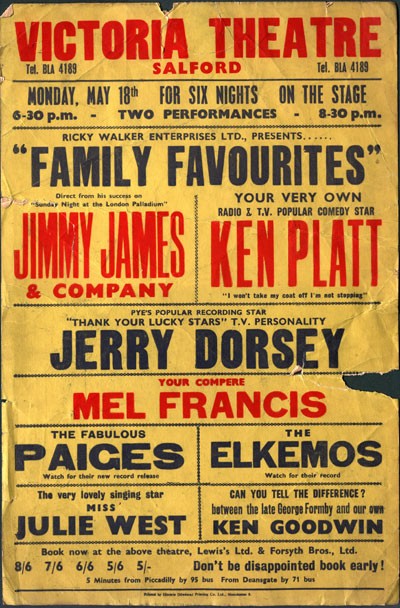 This is a poster of the group The Paiges with Dave Prentice as the lead singer, we also backed Jerry Dorsey & Julie West, it was 1963 Jerry Dorsey took most of the group to see his good friend Tom Jones do his new record "not unusual" at Mr Smith Club off Princess Street Manchester.

mat Says –
what a lovely poster! i love that design...

jsz Says –
Where was the Victoria Theatre?

It is now on the statutory historic buildings list as a Grade II Listed building.

dubwise-er Says –
Just saw this on the randomiser. That is a bloomin' ace poster!!

Alastair Says –
'Can you tell the difference between the late George Formby nad our own Ken Goodwin?' Yes one's dead and the other one is dying on his feet! I also enjoy Ken Platt's catch phrase - " I won't take me coat off, i'm not stopping". Classic poster.
If you'd like to leave a comment, please Login. Login
Manchester Digital Music Archive is licensed under an
Attribution-NonCommercial-ShareAlike 4.0 International License.
Charity no. 1164179
Our archive currently contains 3870 Bands, 758 DJs, 1461 Venues, 323 Industry Professionals and 29722 artefacts contributed by 4048 members.