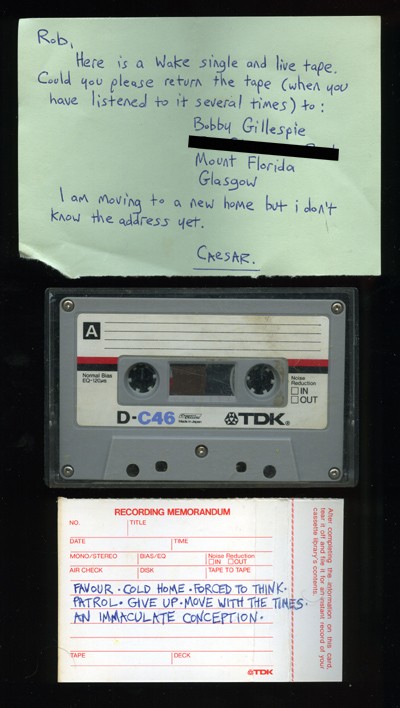 A very early demo tape from The Wake (who appear on this site due to their Manchester connections), which was given to Rob Gretton back in 1982.

It may be the very same tape as mentioned by Bobby Gillespie on the link below where he describes how he and Caesar went to Manchester, found where Rob lived, knocked on his door and personally gave him the tape.

It worked for them as they got some support slots with New Order and got on Factory.

On the tape is a mixture of studio material and an early live show.

mat Says –
brilliant! 'please return after you have played it several times...'

Riot Nrrrd? Says –
This is hilarious! Not just for the "return the tape" bit but also because the tape itself is crap! TDK "D" cassettes were the dustbin of the line, not exactly what I would want to use if I were trying to impress someone with my songs - they must've been really skint if they couldn't afford to record onto SA's.
If you'd like to leave a comment, please Login. Login
Manchester Digital Music Archive is licensed under an
Attribution-NonCommercial-ShareAlike 4.0 International License.
Charity no. 1164179
Our archive currently contains 3682 Bands, 734 DJs, 1355 Venues, 244 Industry Professionals and 22437 artefacts contributed by 3657 members.