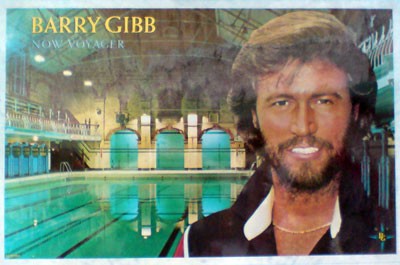 I went to an open day at the beautiful Victoria Swimming Baths last Sunday. Inside was an exhibition of related artefacts - swimming awards, old photographs etc. and this poster of a Barry Gibb 1980's LP cover, shot in the pool.

I wonder if the Gibbs have contributed any money to the Baths repair work?
Artefact added : 5th March 2008
by mat 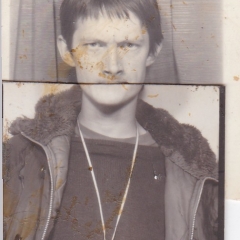 graham Says –
Bazzer made a video at the pool..as well. My freind worked there at the time .Also do you remember The Otherside of Midnight with Anthony H Wilson broadcast a Rave from the pool in 88 or 89..I have a vid of that.with A Guy Called Gerald and Tony W in a wet suite ,Looks a bit rubbish on TV but it realy got going after they stopped filming and inhibitions went out the window.
Also Some of Biting Tongues album Feverhouse was a recording made at Victoria Baths during a Baptism one sunday ,they Had them quite regular ,The Baptees got in the 6 foot end in thier sunday best whilst making an echoing chanting mayhem..(yes I will shut up about Biting Tongues)

mat Says –
yes i remember the other side of midnight - i think they called it 'wet' didn't they? i was actually in half a mind to go to it but decided to watch it on telly instead... i remember it looking a bit empty and being quite glad i didn't go - i should have guessed the best bit occurred later!
If you'd like to leave a comment, please Login. Login
Manchester Digital Music Archive is licensed under an
Attribution-NonCommercial-ShareAlike 4.0 International License.
Charity no. 1164179
Our archive currently contains 3816 Bands, 743 DJs, 1437 Venues, 298 Industry Professionals and 28735 artefacts contributed by 3926 members.