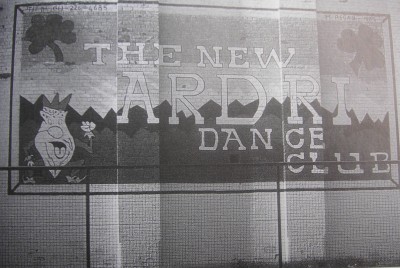 Photograph of the New Ardri club in Hulme, Manchester. The photo is taken from the book Irish Manchester by local broadcaster Alan Keegan, Sutton Publishing, 2004.

This photo shows the gable-end artwork which, the book tells us, was painted by Mike Regan in 1985 as part of his GCSE school work.

It seems this was known as the New Ardri as the original Ardri club was the former College Cinema on Coupland St, Chorlton- Cum-Medlock which hosted roulette, cabaret and wrestling.
Artefact added : 16th March 2008
by Tony/Longfella

KH Says –
This takes me back - Hulme had many wonderful murals back then :-)
If you'd like to leave a comment, please Login. Login
Manchester Digital Music Archive is licensed under an
Attribution-NonCommercial-ShareAlike 4.0 International License.
Charity no. 1164179
Our archive currently contains 3635 Bands, 718 DJs, 1329 Venues, 225 Industry Professionals and 20323 artefacts contributed by 3552 members.