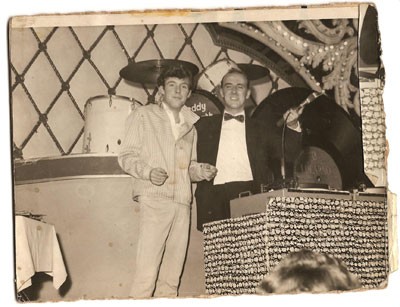 Dave Plumb, doorman and then Dj at the Locarno writes;

"Here is a picture of yours truly onstage with Bob in the dickie bow, as you can see the turntables were old grundigs on a badly wallpapered desk, with LOCARNO on the disc behind.

I started as one of two DJs and our role was to play the records whilst the live band had its compulsory music union breaks, after about 2 months the manager asked us if we would like to play records in shifts and they would lose the live band on Mondays and Fridays for this we were offered the princely sum of £1 10/- per night.

The Locarno could take 1500 people and at 2/6 on Mondays and Fridays had full houses with people coming from as far away as Wythenshawe, Moss Side, Hulme etc which in 1957 was a fair way to go for a night out as it was mainly buses or the train to Sale station.

I have a couple of pictures from that time which I will post after I have had a dig and delve, I then played both the Plaza on Oxford Street (when Jimmy Saville was the manager) and Sale Locarno before arriving in Dave Plumb and the Stones."
Artefact added : 30th March 2008
by mat

1963 Says –
This is great, is it the earliest pic of a DJ using 2 turntables?
Where was the Locarno exactly?

i was under the impression that most clubs still had house bands playing at this time ('50s) and that it wasn't until the mid sixties that djing took over... Dave Plumb must be one of the first club Djs!
If you'd like to leave a comment, please Login. Login
Manchester Digital Music Archive is licensed under an
Attribution-NonCommercial-ShareAlike 4.0 International License.
Charity no. 1164179
Our archive currently contains 3676 Bands, 737 DJs, 1354 Venues, 239 Industry Professionals and 22347 artefacts contributed by 3635 members.