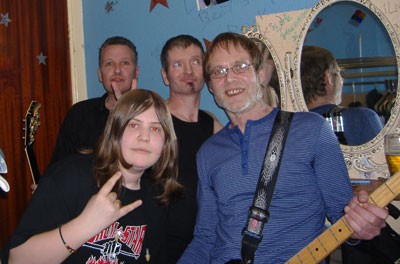 Dan is also the Drummer for O.C.D.

Steve Patton says "It's a bit strange to have a drummer who wasn`t even born when you played your last gig (The Change, 1990 Duke of Wellington, Swinton.) but thats entertainment!"

Shawn Fleece Says –
E I reckon you could all pass for thirteen!

timpo1234 Says –
Dan's a cracking drummer! And the Change 'cut the mustard' once more at that gig!
If you'd like to leave a comment, please Login. Login
Manchester Digital Music Archive is licensed under an
Attribution-NonCommercial-ShareAlike 4.0 International License.
Charity no. 1164179
Our archive currently contains 3660 Bands, 724 DJs, 1346 Venues, 234 Industry Professionals and 22139 artefacts contributed by 3610 members.