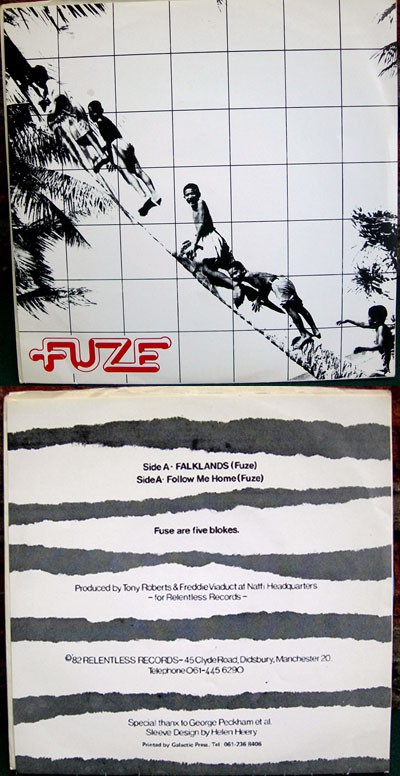 This 7" single is from 1982 and Relentless Records asked me to design the sleeve, so I did! I have the actual single as well as the cover.

I also have a Taster compilation album from Relentless that I designed the cover for, but I don't seem to have the sleeve anymore. Its got bands like 48 Chairs, Cairo, Naafi's etc.

The chaps at Relentless Records claimed to have a martian brain at their headquarters, which they showed me! It was in a cupboard, with a spotlight shining on it! It actually looked like green jelly on a plate wobbling around! Perhaps it was!

mat Says –
i have heard about this 'martian brain' before. i believe it belonged to Chris Seivey (of the Freshies and Frank Sidebottom fame). It was in the cellar of the rabid offices in Cotton Lane, West Didsbury. He would charge 50p to go down and have a look at it. sometimes people were locked in there... whether the brain was real or not, i don't know.

Helen Heery Says –
I can't believe I have only just come across these comments from Mat and Shivadescending. Yes, You're right, we did have to pay to see the brain! And Shivadescending, thanks so much for the link! I thought I'd never see the album sleeve again, even if only as a photo. :-)
If you'd like to leave a comment, please Login. Login
Manchester Digital Music Archive is licensed under an
Attribution-NonCommercial-ShareAlike 4.0 International License.
Charity no. 1164179
Our archive currently contains 3869 Bands, 758 DJs, 1460 Venues, 323 Industry Professionals and 29710 artefacts contributed by 4047 members.