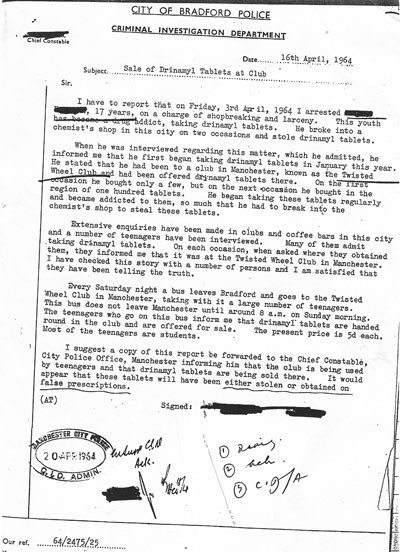 A letter from Bradford Police about the uppers being sold in The Twisted Wheel.

This photocopy was sent to us by Michael Herbert of the Working Class Movement Library, Salford...

I have to report that on Friday, 3rd April, 1964 I arrested XXXXXX 17 years, on a charge of shopbreaking and larceny. This youth has become a drug addict, taking drinamyl tablets. He broke into a chemist's shop in this city on two occasions and stole drinamyl tablets. When he was interviewed regarding this matter, which he admitted, he informed me that he first began began taking Drinamyl tablets in January this year. He stated that he had been to a club in Manchester, known as the Twisted Wheel Club and had been offered Drinamyl tablets there. On the first occasion he bought only a few, but on the next occasion he bought in the region of one hundred tablets. He began taking these tablets regularly and became addicted to them, so much that he had to break into the chemist's shop to steal these tablets.
Extensive enquiries have been made in clubs and coffee bars in this city and a number of teenagers have been interviewed. Many of them admit taking Drinamyl tablets. On each occasion, when asked where they obtained them, they informed me that it was at the Twisted Wheel Club in Manchester. I have checked this story with a number of persons and I am satisfied that they have been telling the truth.

Every Saturday night a bus leaves Bradford and goes to the Twisted Wheel Club in Manchester, taking with it a large number of teenagers. This bus does not leave Manchester until around 8 a.m. on Sunday morning. The teenagers who go on this bus inform me that Drinamyl tablets are handed round in the club and are offered for sale. The present price is 5d each. Most of the teenagers are students.

I suggest a copy of this report be forwarded to the Chief Constable, City Police Office, Manchester informing him that the club is being used by teenagers and that drinamyl tablets are being sold there. It would appear that these tablets will have been either stolen or obtained on false prescriptions.