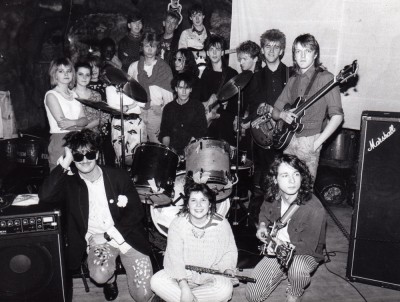 The sound of young Rochdale...1985.
A typical Rochdale Observer photo of College of Art students gainfully employed raising money for Ethiopia with a concert at Tiffany's, Nelson Street, Rochdale.
Including The Flood ( in black ), Otto Smart ( now The Otto Show- front right ), Meatmouth, then known as Nihil ( not shown ) Paisley Pie, The Mistakes, Sven Morris ( front left ) Warren ( fanzine writer and promoter ) and Emrys Morgan ( not shown ).
The Flood at this stage were using a drum kit that was part 30's Danceband, minus the skulls, and part of the kit formerly belonging to the Slaughter and the Dogs drummer ( The Mad Muffet ? .) The legend on my guitar reads - This Guitar Kills Thatcher.
Artefact added : 21st April 2008
by Alastair

Dedspekta Says –
Yes yes... i remember meeting Brian from Slaughter and the dogs on Wilbraham Rd in Chorlton where he lived, he gave me a tour of his drum room and i bought 2 large tom-toms from him for £15 plus a pint ( a bloody lot of money in those days!!! ), i think i got them home on the 17 bus.

Dedspekta Says –
ps The guy in background with the jumper tied round his neck was called Rick... he always had 3 gils round him, Helen Booth ( who i always thought was gorgeous! ) and two others.. he always reminded me of MAGNUM PI

Dedspekta Says –
The girl at the front sat down is Fiona Marr... my brother went out with her in the Flood days... she chucked him for "not reading the Guardian", now that sounds like a John Cooper Clarke song!!!! i still have the cassette from The Two Ships Alastair, with a mental rendition of "Ghostbusters"!

Alastair Says –
Not been checking these posts chris, sorry. I'd like to hear the two ships cassette. I think I did a solo spot supporting Chumbawamba the next year, there was barely room in the pub for the audience.

Dedspekta Says –
Merry xmas Alastair, and indeed everyone!, "Ricks Chicks - Rick was slick, not thick, the girls would flick, and kick, on the dancefloor, till 4... i shoulda been JCC!