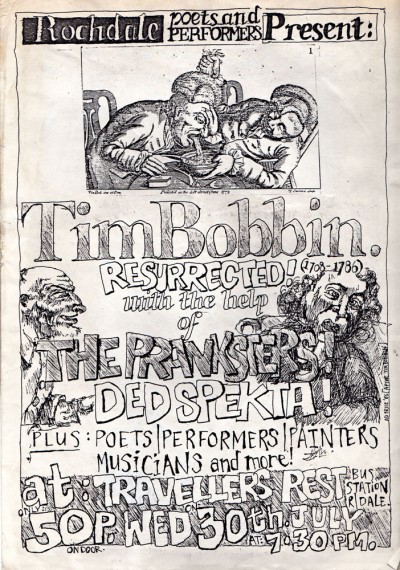 Rochdale Poets and Performers was a loose alliance of Musicians, Poets and Artists who had been using the upstairs room at the Roebuck until we set fire to the carpet with a blazing door ( that's another story ) . For the bicentenary of the death of local dialect poet and satirical artist ' Tim Bobbin ' ( John Collier ) the library and art gallery were programming some rather worthy festival events, so we decided to organise a fringe evening, which they gamely supported.

The poster is one of my typical drawing and photocopy efforts of the period.
Artefact added : 21st April 2008
by Alastair

bouncy Says –
As soon as I saw this I knew it was sent in by Alastair. It's quite pleasant around Rochdale,it's noway as scary as this photo.

Alastair Says –
I dunno all those old women flooding out of Bingo onto the town hall square of an evening could put the wind up anybody...

Alastair Says –
If you care to look Tim Bobbin's grave is up the steps in the churchyard of St. Chads, Rochdale.

bouncy Says –
I might just have a look,if I'm brave enough,and I'll take some garlic and a crucifix with me just in case.

bouncy Says –
I went to look at Tim Bobbin's grave,in briiliant sunshine.He's lying in a tomb with his wife,and other's and it was the only tomb in the graveyard surrounded by railing's,so either someone's tried to pinch him or he must still be very highly regarded in Rochdale. The Jim Morrison of his time.You could of warned me about the 132 steps leading up to the graveyard though!

Alastair Says –
I expect that you were 'effervescing' by the time you reached the top! Especially if you'd had a pint in the Flying Horse.
I've just dug out some other Rochdale music scene stuff in the loft, so I'll have to get round to posting it.
Funny Rochdale always had a thing for poets, there's the monument in Broadfield Park to Edwin Waugh, and there always used to be the poetry and music festival at Champness Hall. All a bit worthy perhaps, but we carried it on ( perhaps more in the spirit of Tim Bobbin ) with the Poets and Performers, and there were a few 'Punk Poets' around in the early 80's - Andy.T and Maggsy to name two.

prankster Says –
the pranksters rocked unruley on this night...i have tapes, n'ting...a prankster

Dedspekta Says –
And i have this very poster in my scapbook from 1986!, i remember doing the caberet drumming for your comedy ten minute act Alastair on the night.. also remember we did a gig there around May 1986 and you and Roger and Leah were all dancing at the front!!

Dedspekta Says –
How could i prankster?, we were just warming up for Madison Sq Gardens i recall... :-)
If you'd like to leave a comment, please Login. Login
Manchester Digital Music Archive is licensed under an
Attribution-NonCommercial-ShareAlike 4.0 International License.
Charity no. 1164179
Our archive currently contains 3661 Bands, 725 DJs, 1339 Venues, 232 Industry Professionals and 22070 artefacts contributed by 3597 members.