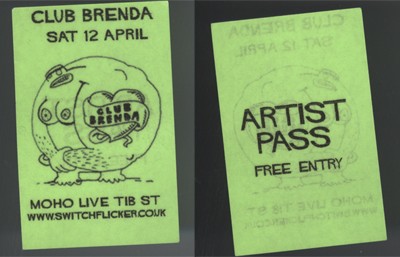 This is my pass for April's Club Brenda. I DJed alongside Jayne Compton, Debbie Jump and laptop pop extraordinaire Zoe 'Hooker' McVeigh. I had a great time playing strange records early doors and made a spectacular failure of managing Divine David Hoyle's intro music. This was David's first Manc gig for a number of years. He painted a selection of disturbing portraits of audience members and railed against the excessive amount of babies in the world (amongst other things), suggesting, memorably, that they be burned to solve the renewable fuel crisis.

Later the same evening I popped along to Paradise Factory to see Derrick Carter. The club smelt like an abbatoir, and a lot of very bog standard house records were played, but all-in-all a pleasant night in the Original Modern TM.