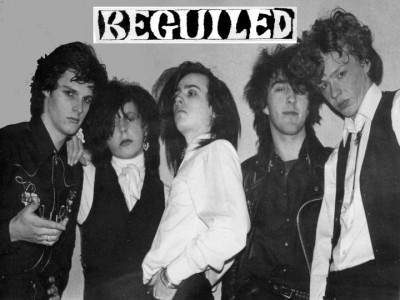 In the end it was all too much, or is that not enough? In the end we all turn to dust. Whether we distinguish ourselves amongst our peers or live an anonymous, simple life ultimately we leave it to the ages to remember us or, like a drop of ink in a flask of water, we dissipate into nothing.

The Beguiled's development through to their final concert in September 1985 saw them take their original aspiration to be a challenging, stand-out-from-the-crowd punk band and, as their own musical tastes matured, supplement their sound with shades of early Detroit Rock, Garage, Glam and Psychedelia.

In that finale, as the summer sun began to fade over the Stockport skyline, all these influences crystallised into a solid live set made of original numbers and white hot covers that, despite all that went before, could be described (by some) as genuinely entertaining.

This blog below collects the artefacts that survive from those heady days and incorporates the writing and materials from the www.beguiled.net website that was launched on the 20th anniversary of the band in 2005

Much of what you're going to read actually happened. Only the names have been changed to protect both the innocent and the guilty. Some incidents may have been exaggerated for comic effect (but you may not be able to tell which) and everything else is a downright lie.

So, Ladies and Gentlemen, I invite you to this corner of cyberspace to tarry a while and judge for yourselves if these young men were (and still are) worthy of a little of the your kind attention.
Artefact added : 21st May 2008
by agboe