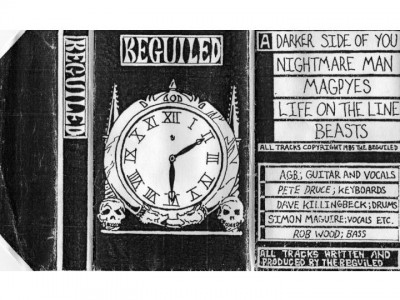 Ultimately the band felt they needed to record some of their material for posterity and profit. In 1984 on a limited budget they went to Playtime Studios, a dingy four-track unit based in Manchester's run-down Whalley Range district.

'The Beguiled Tape' was recorded in two intense recording sessions a few months apart. Although not evocative of their live sound these few tracks do sum up the musical range that The Beguiled tried to cover.

Unfortunately the recordings failed to capture the intensity of the songs. All had more hard-hitting intentions but this was lost in the sterile mix that was applied making the numbers sound somewhat flat and lacking their live bounce. The end result was released in 1985 to little fanfare and sold literally in its tens.

‘Highlights’ include: Magpyes with it's jarring, jangly guitar and laid back rhythm it showed the softer, more melodic side of the band and is strangely reminiscent of the Manchester sound of the times. Darker Side of You is a more complex affair with its dark lyrical content and Cult like pretensions . Nightmare Man and Life On The Line were the up-tempo numbers that were intended to 'round out' the tape and show all the full range of the Beguiled sonic experience

The heavy Goth overtones of Beasts is the final track on the original recording, ironic given that it is the only song that survived from the Stilettos days. Heavily reworked and bulked out with the throbbing low-end roar of a Hammond Organ and plenty of echoing, crunchy reverb on the guitars it was now considerably longer than the early version(s) and much more atmospheric. Dripping with dark portent and undeniable depth it clearly shows the influences of bands like The Damned and Bauhaus on the guys' song writing.

A digital re-mastering of the original tape was undertaken in 2005 brightened up all the numbers re-producing them in an attempt to recapture the lost Beguiled sound whilst also removing some of the unnecessary excesses (and mistakes) from which the original versions suffered
Artefact added : 24th May 2008
by agboe