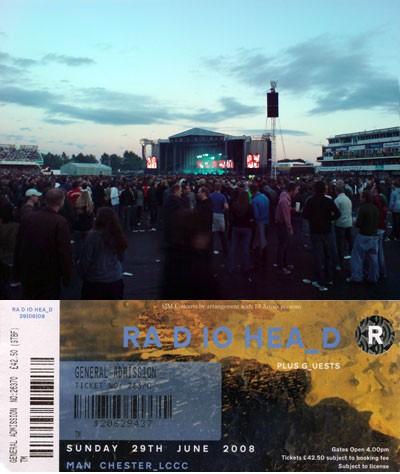 Radiohead, Bat for Lashes and MGMT...

As for Radiohead - undoubtedly they are a great live band, but i really feel this gig suffered from it's sheer size. the stage had been erected as far back as it could go, giving more audience area. i think it was even bigger than the last REM gig here and that was huge.

tickets hadn't sold out and i heard they were going for £5 outside!

i just couldn't get into it- if we went forward the sound and view deteriorated (and there were soooo many people talking!) and when we moved back it was too far away.

KH Says –
I was going to post my ticket and wristband (we had guest pavilion tix with the wristband deal) but you've pipped me to the post! I'd only really gone to escort my partner and to see MGMT who were great but a rather unnecessary additional support as they were largely ignored by the then part-filled venue. I thought that Bat For Lashes were awful (each to their own and all but honestly who really needs another Bjork meets Sinead meets..?) and (again, personally, I've never been a fan) felt that Radiohead were a load of toss! My partner and some friends however would re-iterate what you've said in that what would have been (for them) a great show was marred by the SIZE of things, with the poor light-show not enhancing AT ALL what was going on on stage (no spotlights, etc) and the video screens (being half the usual size and then split-screened and monochromed to blur things further) not helping either. A shame as the sound from the pavilion was generally good and the weather was indeed lovely...

I too also felt that the stage was further back than for REM's last show at LCCC (and at a slightly different angle) and I'd be fascinated to get the final door numbers off SJM for this. At that last REM show, which also had not sold out, the door was 58,000. I wonder what's the total capacity for a gig at LCCC?

jsz Says –
The size of the show wasn't a great help and you can't help but think how much better it would have been in the MEN Arena. However some songs worked very well in that environment despite this, and they were some of the more laidback and beautiful ones such as 'Reckoner', 'Nude' and in particular 'Pyramid Song' (I can't really put into words how great that was).

KH Says –
Reliably informed that the door for this show was 41,276 which makes me think that my figure for the last REM show is wrong as this definitely felt like the larger crowd...

mat Says –
still... that's a lot of people to have at a gig for one band. about a third of what glastonbury used to be!

KH Says –
Ha Ha Ha - the first times I went to Glastonbury the capacity was around 20,000!!! I'd just passed my driving test and remember the first year driving a battered yellow Renault 5 with an old doorless wardrobe full of firewood strapped to the roof on-site (as you did in those days), parking up with some mates and pitching our tents in a circle on the slope leading up and out from the Pyramid Stage and then watching the weekend's acts from deckchairs around our camp fire...

Hawkwind, New Order, Aswad, The Smiths - those were the days :-)

jsz Says –
You can see some great New Order footage from their 1981 appearance on the recent 'Live In Glasgow' DVD, it's part of the excellent 'Rare And Unseen Footage' on disc 2. There's also some behind the scenes stuff as well as the performance, all filmed by AH Wilson.
If you'd like to leave a comment, please Login. Login
Manchester Digital Music Archive is licensed under an
Attribution-NonCommercial-ShareAlike 4.0 International License.
Charity no. 1164179
Our archive currently contains 3728 Bands, 739 DJs, 1409 Venues, 255 Industry Professionals and 27292 artefacts contributed by 3814 members.