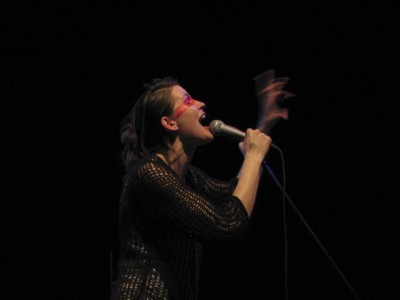 Peterloo Massacre might have a name steeped in Mancunian history but there's little of it in the music - or perhaps there is. Whilst the capital's press would have you believe we have nothing to offer beyond heavy eyebrowed indie rock, this is also the city that gave the world Voodoo Ray and Lamb's "Gorecki". That said, Peterloo Massacre's clearest reference points are from the other end of the country; Tricky, Massive Attack and, well, even their flyers say "Manchester's Portishead Reincarnated" - unfortunate timing, given that the real one just have been. In truth it does this stunning band a disservice to suggest they're little more than someone's understudy. Kin's voice is an instrument of some versatility, crackling like Thom Yorke one minute before shifting into deep nicotine-stained soul. Meanwhile Paul and Colin create deeply-layered symphonies of dark, twisting electronics and the live if equally synthetic drums of Howard add power and shape. Like all the best electronic acts Peterloo Massacre build atmospheres that sound like film scores, multi-faceted and absorbing.
Review by Cath Aubergine
www.myspace.com/u...
Artefact added : 13th July 2008
by pmassacre