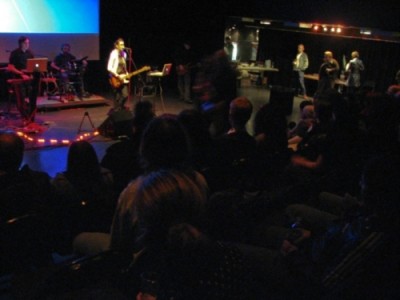 plus films by Kate Jessop and Kerry Baldry

This event is a double release party for two of Manchester's possibly rarest electronic outfits caro snatch and Peterloo Massacre on Leeds based emerging label Anorakism (who has a track on the current Wire Magazine Tapper CD no less just for official anorak status).

Anorakism chieftess DJ Paizan shall be the evening's DJ catering for the head, heart and haunches whilst "rigidly adhering to non-conformity". Being an avid networking force, RaGD has managed to snatch Diana Simpson, one half of electro-acoustic laptop duo The Splice Girls to open the proceeding and Girls on Film artists Kate Jessop (artist in residence at MMU) and Kerry Baldry to provide visual stimulation with their abstract and superbly produced films.

RaGD provocateur caro snatch, recently quite candidly described as "Laurie Anderson on acid", will be launching her new EP "Plan in it" with a suitably random live set joined by acoustic guest collaborators Daniel Weaver, Hypnotique and more to be confirmed. The EP is a largely moody and broody follow-up to her Berlin produced debut album. This time also recorded and mixed solely by the hardware poetess, hopefully results in an even more authentic expression of the original rare green bitch's sonic and poetic cosmos. This novelette is of course just as enigmatic and daring to be rare and real as caro continues to defy tidy definition, predictable patterns and consumer category. Branching out, a few rather talented musicians have been invited into the mix to broaden the unconventional palate.

Peterloo Massacre - Formed in late 2006, Peterloo Massacre (Paul Green, Colin Fry, Howard Jones and Kin) blend 80's electronica with 90's indie, trip-hop and contemporary folk. In result they are guided by the highly unique vocal lines of Kin through surreal synth-based soundscapes. They have been compared to Massive Attack, Thom Yorke and Portishead and have shrugged off the indie electro-pop zeitgeist in favour of something more cerebral and are all the more seducitve in consequence. Their self-titled e.p showcases the band's deft ability to span multiple genres and make it look effortless. The e.p includes a remix by the acclaimed beatmaker and arranger Robert Lippok. If new sounds are craved then Peterloo Massacre are making them loudly.