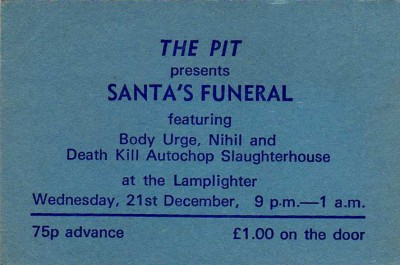 The Lamplighter Club provided a venue for a lot of music at this period in Rochdale.
The room upstairs was cheap to hire and had a mirrored dancefloor- which acted as a stage- down one side of the room. The DJ booth provided unexpected entertainment as a well placed stamp on one of the boards would quickly terminate an unpopular track by sending the needle skidding across the vinyl.
As I remember Andy Mcvittie and Mark Whittam organised quite a few gigs under the name 'The Pit'.

Nihil was Mark and future famous author Nick Blincoe, at this stage shouting Jacques Brel covers. Later they made a record for Factory as part of Meatmouth.

Death Kill Autochop Slaughterhouse was another silly part time group. If this is the time I played with them the set included Sweet's Teenage Rampage, and Rose Garden Funeral of Sores by John Cale! I think I was probably a member because I owned a guitar and a bass. The set involved the use of an angle grinder and smashing a TV on stage, showering the audience with sparks and broken glass. I believe that Byron, one of the 'singers' was gashed on the arm with the angle grinder during our set and had to exit quickly for the infirmary- we of course, continued playing. Some of the audience were visibly shocked by it all.
Artefact added : 15th July 2008
by Alastair

Alastair Says –
How I wish we'd had a camera.
If you'd like to leave a comment, please Login. Login
Manchester Digital Music Archive is licensed under an
Attribution-NonCommercial-ShareAlike 4.0 International License.
Charity no. 1164179
Our archive currently contains 3831 Bands, 752 DJs, 1454 Venues, 303 Industry Professionals and 29442 artefacts contributed by 3989 members.