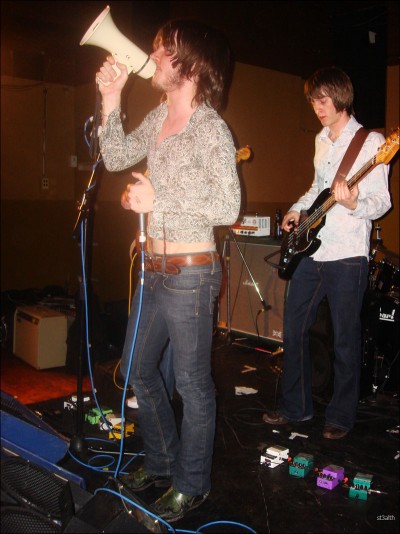 Right, time to introduce Manchester's next - or next but one, or two; these things take time - megastar frontman. His name is Daniel Rimmer, his skinny frame's wrapped in a very tight girl's blouse and equally tight jeans riding low on his hips, and he's got the presence of the young Ian Brown and Liam Gallagher and Bobby Gillespie. Yep, all of them. And a megaphone. And, luckily, he's the singer with The 66, who've got every bit of the sleazy rock'n'roll spirit required to give him context.

Think of Primal Scream when they really rock out with the loose-limbed post-baggy acid blues, and then imagine if they were still in their teens, or not far off. And fuck, can these lads play. Not only in terms of ability and togetherness, but they've got the performance bit nailed down too.

It's retro, yeah, but in the sense of instant classics as opposed to old hat. Those gloriously loopy organ lines straight out of some late 60s garage band, punk-fired guitars, and there's Daniel up on the drumkit, then swinging a strobe light around over his head. The crowd - who by the end of the set comprise not just the usual mates you get with a lot of unsigned bands but pretty much everybody in Dry trying to cram into the back room - love it, and rightly so.

The band's Myspace page tagline reads 'Good evening Wembley!', and I think they're only half joking; there's just something about these lads that says "massive".