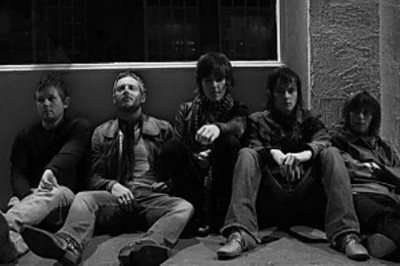 Unsigned band nights are a strange affair. In the main, the audience is made up of friends and family of the bands playing and the population of the area immediately in front of the stage changes completely between every band. To go to such a night, just hoping to catch the next big thing is foolhardy in the extreme, unless you are willing to suffer endless disappointment. However, just occasionally, a band walk onstage and for half an hour, shake a small corner of the world from its axis. Tonight is one of those very special nights.

The 66 are a Warrington band, who have embraced the modern myspace age of self-promotion. Indeed, their name has been ingrained in my sub-conscience for several weeks now, to the extent that I am slightly nervous before seeing them, for fear of disappointment. I shouldn’t have worried. This band are truly epic and their influences are written large across their music. From The Verve influence in ‘City of Culture’ through to the Led Zeppelin-esque ‘Rise’, this band make music that will surely fill venues far larger than Moho in Manchester, if there is any justice at all. Front man Daniel Rimmer makes the stage his own and has the charismatic cool of a Richard Ashcroft or Robert Harvey. Indeed, Harvey’s band would have been proud to have written a tune as sky-scraping as ‘Eastern Europe’. The keyboard of Paul Glover hints at The Doors and entwined with Mike Bee’s busy guitar lines, makes a truly engaging sound For a man of such slight stature, Rimmer’s vocal is enormous, although with tunes as big as these, it needs to be. They play a brand-new song called ‘Salvation’ and if they continue to knock out tunes like this then a glorious debut album is guaranteed. The vocal becomes a Gallagher sized rasp for penultimate song, ‘Whole Wide World’ and it is clear that there are many levels to The 66’s music. Final song ‘Firefly' builds to an enormous ending and even the heads of those here to see the other bands are turned. I hope it is a very short time before I get to see this band again.

It would have been difficult for a good band to have followed The 66. The bad news for The Suns is that they’re not even a half-decent band. The songs veer way too close to the sound of The Coral but without the all important groove. There was one song in the set which briefly sounded a little like The Doors, in the way that The Coral often do. Lads, there is money in the tribute act arena and I see your future at The Limelight in Crewe. The Quarrel anyone?

Tonight belongs to The 66 and whilst that is hardly great praise on a night such as this, I feel that they will be claiming far bigger prizes before too long.