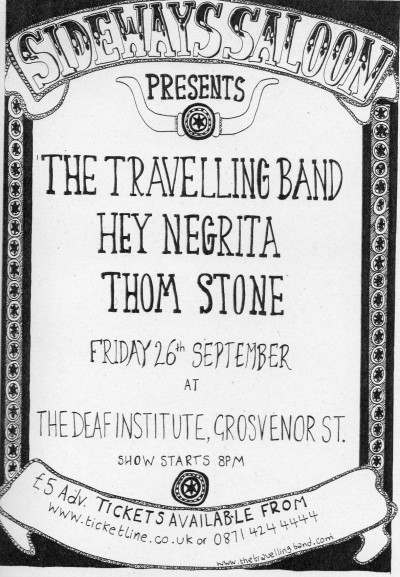 The Return of the Sideways Saloon!


The Sideways Saloon is back!!!

After a warm and cosy summer holiday the Sideways Saloon returns. Bigger, Brighter, and a new home!

We have an extra special night of music this month with The Travelling Band returning from Micheal Eavis' Equinox Party having just played with Franz Ferdinand and the Ting Tings. A rare homecoming gig as the band are currently touring preparing from the release of their debut album in November.

Described by mojo as A joyful sourmash-sodden affair, blending country, rockabilly and honky tonk, Hey Negrita were one of the main talking points of this years SXSW festival in Austin, beating the Texans at their own game. Part Tom Waits, Part Bob Dylan they are due to play some of the best southern fried music you'll hear all year.

Thom Stone’s track ‘She Knows’ was picked up by XFM’s Marsha Shandur earlier this year, and has been featured on E4 sit-com ‘The Inbetweeners’. Amazing live, this singer-songwriter, produces soulful, bluesy melodies and has played with some great artists recently including Greg Allman, Laura Marling & I Am Kloot.

Tickets available on-line at Ticketline.co.uk and in-store at Piccadilly Records.