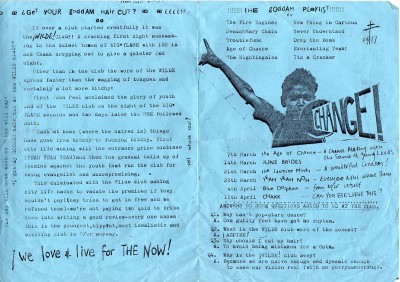 Inside pages of a flyer for The Wilde Club-( every Thursday 8 pm till 2 am £1 ! ) at the Man Alive club, 94 - 98 Grosvenor Street. Mark Whitam, a friend from Rochdale was involved with this, as a mate of Greg and Dil from Big Flame.
Dave Haslam was DJing at the club prior to the Venue, then the Haçienda.
I remember seeing Heptonstall's Bogshed here- with support from a puppet show, which was excellent.
Artefact added : 27th September 2008
by Alastair

mat Says –
i think i may have gone to some of these... does the listings say:

Alastair Says –
Yes. I remember us being quite shocked that part of Age of Chance's set was basically play back from a DAT machine, how innocent we were. Yeah Yeah Noh? Their track 'Bias Binding' still sticks in my head.
The playlist is quite interesting too :

the section ' Answers to some questions asked us at the Club' includes a couple of gems.

Q: Why can't popstars dance?
A: Cos' Guilty feet have got no rhythm.

Q: Why should I cut my hair?
A: To avoid being mistaken for a Goth.

simong Says –
The 'why can't popstars dance' question is of course a quote from Big Flame's 'Why Popstars Can't Dance' which is in turn a quote from George Michael. Not sure what came first here.

tenchahoy Says –
I saw the nose flutes with bogshed. The singer kept his head (and mic) in a suitcase for the entire show.

Alastair Says –
I seem to remember the singer from Bogshed's 'stage-wear' involved a jumper that had strayed to close to the gas fire and had one of those big orange burns up it...

tenchahoy Says –
Sounds about right - it wasnt all paisley shirts in C86 was it!!

Alastair Says –
as I said Bogshed were from Heptonstall, near Hebden Bridge, whose other claim to fame is Sylvia Plath's grave. I think I saw them at the Trades Club in Hebden as well ( thats Bogshed, not Ted and Sylvia!) We used to go over there from Rochdale quite a lot, either to play, or watch stuff. I remember seeing Crass there, amongst others.
If you'd like to leave a comment, please Login. Login
Manchester Digital Music Archive is licensed under an
Attribution-NonCommercial-ShareAlike 4.0 International License.
Charity no. 1164179
Our archive currently contains 3744 Bands, 739 DJs, 1423 Venues, 277 Industry Professionals and 27961 artefacts contributed by 3878 members.