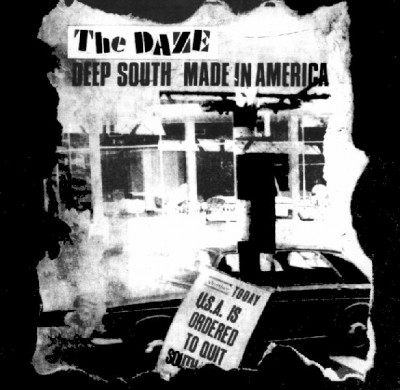 Front cover of The Daze's only single, entitled "Deep South".

I remember that we self-funded this piece of crap. It cost us about £1000 all told, for which we got 1000 copies of the single (some of which are still in my loft).

And how could I ever forget the evenings spent glueing those damn covers together, trying to keep them nice and clean but inevitably getting our sticky fingerprints everywhere.

Interestingly we sent about four or five hundred of them straight over to a promotions company, whose job it was to get the single played on the radio, reviewed in the press and generally plugged wherever they could. It was for sale in Virgin Records on Market Street, though I doubt they were knocked over in the rush. I know we also received a reasonable amount of airplay from some of the BBC local radio stations (Derby and Nottingham in particular, I think) and certainly lots of reviews in fanzines and newspapers.

My abiding memory is being in the car with our bassist Steve, driving through Manchester, when it came on the radio. We actually pulled over and stopped the car to listen to it. It was the greatest feeling in the world to hear your own song coming across the airwaves, and to hear the DJ say "... and here's The Daze from Manchester".
Artefact added : 19th October 2008
by the_daze

Kevin Geraghty-Shewan Says –
Pretty sure I still have mine somewhere!
If you'd like to leave a comment, please Login. Login
Manchester Digital Music Archive is licensed under an
Attribution-NonCommercial-ShareAlike 4.0 International License.
Charity no. 1164179
Our archive currently contains 3873 Bands, 759 DJs, 1464 Venues, 323 Industry Professionals and 29799 artefacts contributed by 4063 members.