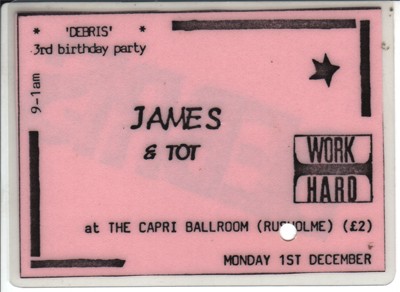 This was a great night...a gig to celebrate the third birthday of Dave Haslam's Debris magazine. 'Play Hard' was Dave's record label who released records by King Of The Slums and The Bodines amongst others.

The Capri Ballroom was a nice little place above an Asian supermarket on the corner of Yew Tree Rd and Platt Lane in Rusholme.

It was a packed gig and I remember seeing Tosh Ryan videoing it so somewhere there's footage of this.

Featured in the following MDMArchive online exhibitions:
Tickets from a Village

annie Says –
I remember in the early '70s when this was above The Co-op and it was a club opened on friday and sundays for under 18s It was called The Pop Inn and was the best thing since sliced bread. First song I ever danced to was Lou Christie 'Lighting Strikes' and the second was Funky Street' forget who sang that now.I still have my membership card somewhere :)

BettyBoolean Says –
I was at this gig and recall one of the girl singers from TOT inviting members of the audience to join them in the shower at the end of their set!
If you'd like to leave a comment, please Login. Login
Manchester Digital Music Archive is licensed under an
Attribution-NonCommercial-ShareAlike 4.0 International License.
Charity no. 1164179
Our archive currently contains 3683 Bands, 733 DJs, 1339 Venues, 226 Industry Professionals and 22632 artefacts contributed by 3696 members.