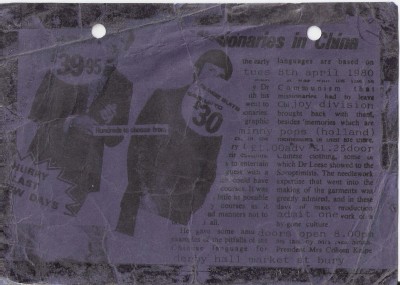 This is the infamous latter day JD gig at Bury's Derby Hall: basically Ian C wasn't well enough to perform and a 'riot' ensued!
Handbags at Dawn, more like, but for a couple of minutes it was very Rock 'n' Roll - I had a review published the following month in the semi-pro City Fun magazine (can't find it at the moment) and remember putting the blame for the squabble squarely on the local Perry Boys who'd sneaked in through the fire escape - I was there, so it must be true!
Incidentally, Tony Wilson's portrayed with his ex-hippy haircut throughout the 'Closer' film, but I remember him coming up the stairs carrying a bongo and with distinctly spiky New Wave hair on this night!
I miss him.
My old mate Pete Barlow played records in between the bands - he lives in America now, I believe.
I'm prepared to claim that I played records (please note, we were too cool to DJ!) more often at the Gigs nights at the Derby Hall, but Pete managed to get the credit for this particular night.
Anyone know who the short-haired roadie/henchman was that I confronted on the dancefloor, persuading him to stop waving a drum or mike stand around in a threatening manner?
I think I've read that Rob Gretton reacted in this way, but the guy wasn't wearing glasses - obviously I realise that glasses-wearers will take them off if they're ready for a fight!
What fun we had.
Artefact added : 23rd October 2008
by shadow

oldmonkey Says –
Nice one, always good to get some more info on this most infamous of nights. If only we had a recording of the "gig"!

Think the roadie you confronted may have been Twinny.

Abigail Says –
Thanks for the brilliant story, Stuart. Great!

Mike Noon Says –
Ha ha. I was also present and also had a review published in City Fun. You must be "Stuart (from Bury)"? I also kept the ticket (one of the very few I did for the hundreds of gigs I must have been to over the years).

chris structure Says –
For the most definitive review of this gig read Mark Burgess book View from a Hill, its from a fans viewpoint and tells it as it was no Factory folklore or hyperbole.

Shaker1960 Says –
I was on crutches (and still a serving soldier so couldn't afford to get involved in any sort of fracas) so did a bit of a 'body-swerve' to the bar area as soon as things got weird. As (the other) Stuart says though, it was very much 'handbags' rather than the full on 'riot' that is usually described (mostly by people who weren't there). I've a feeling Pete Barlow played records at the ACR gig (which, if memory serves me correctly, was the previous week) rather than this infamous night but could be wrong on that. I can check; he does indeed live in the US now and I was 'best man' at his wedding in Austin, TX a few years ago.
As with a lot of such things though, (eg The Pistols at the Lesser FTH - where I wasn't btw!), if everyone who claims to have been there that night actually was, the Derby Hall would have to be the size of G-Mex!

shadow Says –
Hi, Stuart, I'd forgotten about your time on crutches! Didn't you carry on playing double bass balanced on one leg?

Shaker1960 Says –
Hello Stuart. By then I may have been 'mended' enough to be down to 'one crutch' actually but still on 'convalescent' leave. I hadn't taken up playing bass then though. My first ever gig was 'depping' (on electric bass) with The Renegades the following Xmas at the Cyprus Tavern.

SueC Says –
Amazingly I've still got my ticket as well, about the only one I have from that time (though as a regular Derby Hall girl I must have at least one Here & Now ticket kicking around somewhere) ..and of course I am sure it was me that was playing the records that night, mainly due to a vague memory of Martin Flitcroft slagging me off for playing the Bunnymen, but it could have been another night altogether who knows? Lovely to revisit this time though - I also knew Pete Barlow - and as other posts keep referring to you as Stuart I am guessing you are 'our' Stuart?? That is belonging to the girls of BCGS??? Hope so!

shadow Says –
Hi, SueC - two Stuarts have commented here, one played bass with the Renegades and Rhythmaires and the other one is me! "Owned by the girls of BCGS" is tattooed on my heart...

SueC Says –
Stuart!! That's made my week. What a fantastic turn up. And all because of 24 Hours in A&E (long story) I am aware this isn't friends reunited, but if you would like to get in touch email me at suecasey777@aol.com xx

Phil Alderson Says –
I was at this gig at the derby hall and im ashamed to say I kicked the door in to get out ,the crowd were confused because in those days no one knew how ill ian Curtis was we all thought joy division were taking the piss and I thought myself he was pissed when he came on coz he seemed to fall backwards and get taken off.it was only later when the book came out did we realise that he had just come out of hospital after a suicide attempt and how bad his epilepsy actually was.the thing I remember most about this gig was the 6 ft 6 minny pops singer who looked like elvis Costello ha ha
If you'd like to leave a comment, please Login. Login
Manchester Digital Music Archive is licensed under an
Attribution-NonCommercial-ShareAlike 4.0 International License.
Charity no. 1164179
Our archive currently contains 3831 Bands, 752 DJs, 1454 Venues, 303 Industry Professionals and 29442 artefacts contributed by 3989 members.