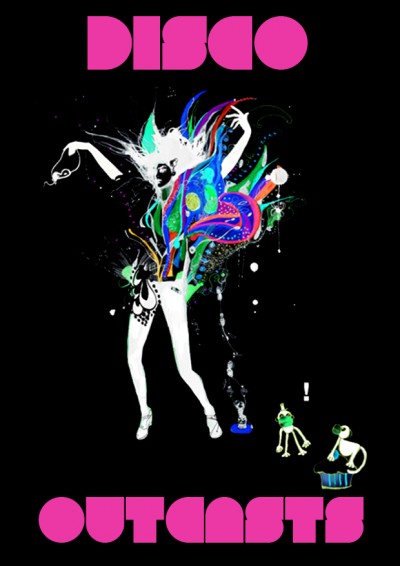 On a rainy night in a dark Manchester basement the Disco Outcasts first collaborated, playing space discoid music to a crowd of the Northern Quarter’s cool cats… The vibe was electric, beer was flowing and onlookers had their heads nodding to this special new allegiance. Not knowing things were about to explode Stefano and Leo decided to relocate to Manchester’s kitsch disco dive, better known as The Purple Pussycat. The pair instantly fell in love with the venue, thinking Daft Punk video meets 70’s strip club and with much delight were quickly snapped up as Saturday night residents. The combination of the quirky basement and sleazy disco sound track makes this one of the most entertaining nights out in the city!

With the duo attracting interest from some of the coolest underground parties around the country it was no surprise that they have done this before! Stefano is a real legend in the Manchester music scene, having released records that sold in excess of 70,000 units and playing everywhere from the Hacienda to Glastonbury, from Ibiza to Reykjavík… Stefano has toured with acts such as Oasis and Run DMC, demonstrating he’s one of the most versatile DJ’s around. Leo has quickly become one of the cities most exciting talents, with a record collection reminiscing those who are twice his age. His technical ability has allowed him to impress many a veteran, dubbed junior disco amongst his peers. Leo is the brains behind Manchester’s legendary Phuture parties, as well as holding residency for Ibiza’s notorious Zoo Project crew.

In a short space of time the duo helped create a nu-disco scene over at the newly refurbished Cellar in Blackburn. The nights included guest slots from their heroes including a reel-to-reel session from the master of electro funk Greg Wilson. Outside of their Disco Outcasts parties they are busy with residencies in cities around the country including Manchester, London, Liverpool and Blackburn, as well as regular bookings to guest at some of the most weird and wonderful parties!

Stefano is also a regular fixture on David Dunne’s NuCool show on Galaxy Radio, rubbing shoulders with the likes of Joey Negro, Alfredo, Greg Wilson and Graeme Park… If you love disco, the funk, electro boogie, italo, cosmic weirdness and general offside action then look no further than Stefano and Leo.
‘THE DISCO OUTCASTS’
Artefact added : 30th October 2008
by stefano