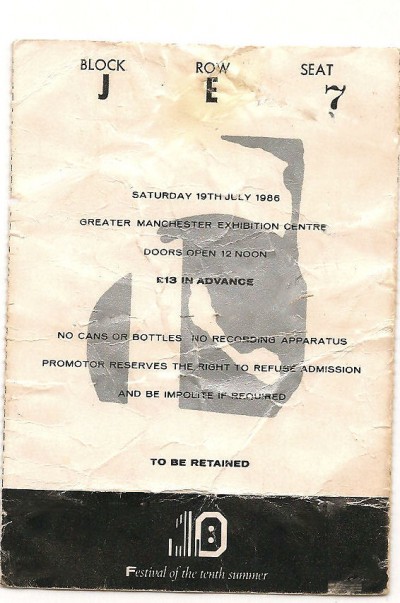 Ticket stub from festival of the tenth summer gig at Gmex.
Great day. Pretty sure New Order, Smiths and probably others were filmed during their sets, but i've never seen any footage. Anyone know of any out there?
Artefact added : 7th November 2008
by Steve D

simong Says –
I remember speaking to someone whose girlfriend was filming it for the university and they had some semi-pro kit but otherwise not. If there was anyone else it might have been the bands or labels. I think Pete from Doublevision was there to film the Cabs but the Cabs didn't turn up.

jsz Says –
Footage exists, though not for The Smiths who insisted they were not filmed, in what was probably a pointless anti-Factory statement by Morrissey.

Alastair Says –
There is an audio bootleg of The Smiths' set, which is really good, taken from the Piccadilly Radio broadcast, so surely someone taped the New Order set as well? I've posted a rather dodgy photo of the stage if you're interested, and a photo of my rather faded T-shirt.
If you'd like to leave a comment, please Login. Login
Manchester Digital Music Archive is licensed under an
Attribution-NonCommercial-ShareAlike 4.0 International License.
Charity no. 1164179
Our archive currently contains 3692 Bands, 734 DJs, 1352 Venues, 241 Industry Professionals and 22479 artefacts contributed by 3665 members.