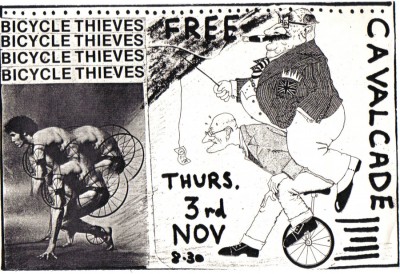 Bicycle Thieves used to do all their own primitive photocopied DIY 'cut and paste' artwork for flyers and posters advertising local gigs [as did many other local bands at the time]. We also did our own fly-posting much to the annoyance of Tosh Ryan who operated his own profitable fly-posting business out of Manchester and hated anyone who challenged his monopoly.
This effort was for a gig at the Cavalcade pub in Didsbury which used to put on local bands in the upstairs
bar.
Artefact added : 8th November 2008
by chezc