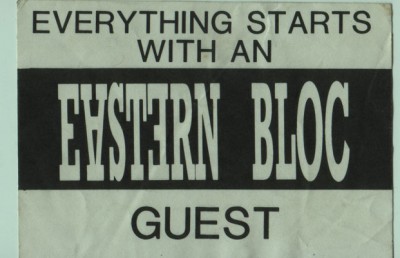 Fantastic illegal warehouse party, organised by the Eastern Bloc record shop. It was held at an old mill near the fire station in Collyhurst. When I arrived at 1.30am it was in full swing - with The 808 State Spinmasters Darren and Andy playing. Everyone was completely off their heads and were throwing themselves around the place like mad fools. I remember Andy Barker mixing Renegade Soundwave's 'The Pahntom' into 'Acid Rock' with great effect - but at that moment about 50 riot police burst in to break up the party. We were all gutted - it really was a top night. When we went outside there must have been about 20 black mariahs and another 50 cops in riot gear, which was ridiculous. I don't think even Peter Sutcliffe had as many police guarding him when he went from court to prison. Somebody should have done us all a favour and given James Anderton an E.

mrfac51njh Says –
was the rave in the old browns upholstery building?
If you'd like to leave a comment, please Login. Login
Manchester Digital Music Archive is licensed under an
Attribution-NonCommercial-ShareAlike 4.0 International License.
Charity no. 1164179
Our archive currently contains 3714 Bands, 737 DJs, 1367 Venues, 252 Industry Professionals and 26418 artefacts contributed by 3771 members.