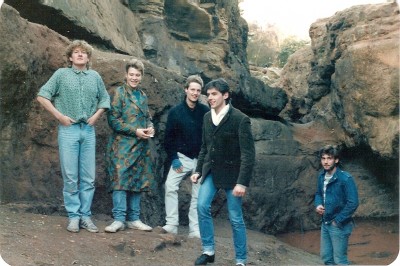 Based in Alderley / Wilmslow, The Risk played their own Soul / Rn'b tinged rock style and were regular giggers around Mcr. The band featured the vocals of Joe Roberts (pictured in the middle) who went on to have success as a solo artist and Jimi Goodwin (2nd left), now of Doves, on guitar. Jimi's musicianship was exceptional for his age (15 at the time I think?). I can't recall the drummer's name (far right) sorry; the other two members are guitarist Steve Green (far left) and 4th left is bassist Dermot Aherne. Picture was taken on a bitterly cold Sunday morning on Alderley Edge as part of a photo shoot for publicity stuff.
Artefact added : 1st December 2008
by mitch

josephcarl Says –
The drummer (far right) Is no other than Pat Goodwin. He Had a strange and beautifull kit, like something out of the Matrix.

OT Says –
like the one Yes used to play? designed by Roger Dean?

josephcarl Says –
Ok, I think we need to see photo's now. It's like the Phantom Kit that must reveal itself!

mitch Says –
I've had a dive through old pictures but can't find anything; and a trawl through 'google images' using various different tags hasn't come up with anything. See if this helps. The bass drum had a single skin but If I recall correctly the casing split into two curved tubes. All tom-tom's were elongated with a curved tube ending. And it was white. Not the greatest picture with words but it was a long time ago.

Whitty Says –
Hey Mitch not sure if you are still active on this platform, just wondered if you had access to the original photo of The Risk on the Edge, I'd love a copy for the cover of an old scrapbook of mine, cheers Whitty.
If you'd like to leave a comment, please Login. Login
Manchester Digital Music Archive is licensed under an
Attribution-NonCommercial-ShareAlike 4.0 International License.
Charity no. 1164179
Our archive currently contains 3873 Bands, 759 DJs, 1464 Venues, 323 Industry Professionals and 29791 artefacts contributed by 4061 members.