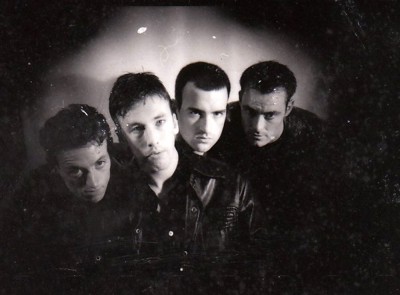 The first indie band to play at Night and Day, with a residency there between 95 - 96. Playing to disgruntled jazz fans, who were waiting for the fruity drum solo that never came. Managed by Joe Moss, and near the end, Tom Hingley, they disbanded in 1998 after half-deals and ill-fated support slots. Craig Cash loved them, Pete Mitchell loved them, Caroline Aherne did too...a band out of time amidst the Britpop era

mancs123 Says –
I was the original drummer (Carl Morley), I did the first few demos with Damian, Mike and Lee , though Lee wasn't the original bassist , there was also a ian sharpe the original guitarist and great guy alongside mike Doyle on guitars , mike played lead , ian was classical trained and a great player.. I had no formal training on drums and basically I picked up the sticks and two weeks later joined a band with Damian singing , ian and mike on guitar and someone else on bass ( can't remember his name , was a James fan) we came second in a battle of the bands coming second after jamming for around a month , not bad... Anyway this night we was called to a band meeting in a pub in Manchester, I decided to have two acid tabs before going down there Lol , bit of a mistake for when we arrived , Damian and mike was there to tell us they was splitting the band. I then proceeded back to blackley and tripped the night away in a friends flat who thankfully was a proper buzz head. Me and ian went on to form two more bands one with a male singer(volley)and then a female singer(paper moon) both drew lots of people to the gigs but eventually dissolved... There is my little bit for music sakes history. Peace.
If you'd like to leave a comment, please Login. Login
Manchester Digital Music Archive is licensed under an
Attribution-NonCommercial-ShareAlike 4.0 International License.
Charity no. 1164179
Our archive currently contains 3714 Bands, 737 DJs, 1379 Venues, 252 Industry Professionals and 26689 artefacts contributed by 3779 members.