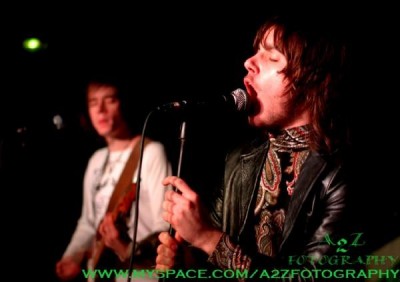 Moho is in the hands of Versus Cancer tonight, with an acoustic Starsailor set billed as the main attraction, although it's pretty clear that's not the case in reality.

The opening slot goes to Warrington's The 66, but they play it like they're headlining. Take a singer from the Ian Brown school of stage presence with fire in his eyes and a skintight paisley shirt, a big pile of young hungry energy, some golden-age Stones via Primal Scream grit, driving rhythms, light the touchpaper and watch them go. Somehow they manage to take a load of the most well-worn influences and make something truly exciting out of them. Tight as anything - you have to be, doing this sort of thing, and they've got the confidence and the natural instinct for how a song should feel as well as sound, with songs running to five or six minutes without ever losing the plot. Meanwhile subtle keyboards add layers of depth. The final "Firefly" is a great colossus of simmering laddish groove-fuelled rock'n'roll that leaves you wanting more.

Working for a Nuclear Free City are, frankly, fucking bonkers. Musically that is - the weird technicolour offspring of out-there prog
rock and warehouse rave culture, played by five remarkably ordinary looking blokes. This is a much more guitar-flavoured set than their recent Ruby Lounge headliner, great towers of Mogwai swirl, albeit stuffed full of deranged synth psychedelics and the occasional rather displaced sounding bit of vocal. They're a band you'd be hard pushed to tire of watching as they never seem to do the same thing twice, whose 27 thousand track sprawl of a debut album alone could spawn about six completely distinct live sets; they make the new kings of eclectic MGMT sound like a one-trick pony.

The place is pretty full by now, and the band about to hit the stage are the one most people are here for. And not because of the bald-headed gentleman on guitar; you're probably going to read all over the place about "Bonehead's new band" but to those in the know The Vortex have been one of Manchester's hottest underground properties for a while. Never mind the accolades from the usual suspects, this is a band with a growing following of real people, and with the new addition of said second guitarist a sound so powerful you wonder if the speakers are going to blow. Think Primal Scream in their second (or was it third?) golden age, when they found the perfect mix of hammerdrill beats, rock'n'roll hedonism and raw soul, only with more Mondays swagger and a splattergun of samples hitting you from every direction. Exhilarating, explosive, almost apocalyptic but in a deliciously euphoric way, hard wiring into your nervous system forcing you to dance. And they look like rock stars in waiting; the laddish interplay between singer Mike and guitarist Maz; bassist Nick standing on the front edge of the stage whipping up the crowd; Jaxx with her deep soulful voice and braided hair flying everywhere, it's like there's a party on the stage never mind in front of it with the smoke machine fires through a frenzy of coloured spotlights. When it all fizzes out you're left standing wondering what just hit you.

I really don't know how some bloke with an acoustic guitar is going to follow that, and I'm not alone in not staying to find out.
Artefact added : 23rd January 2009
by the66