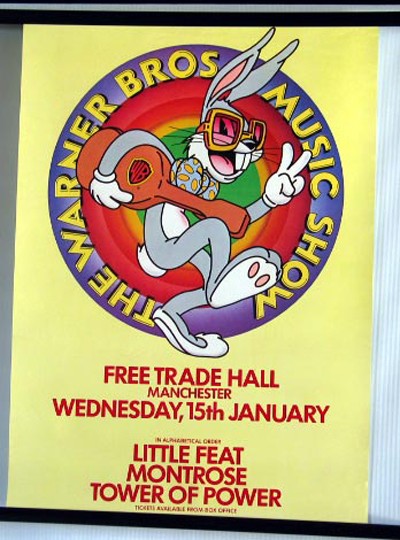 Little Feat, Montrose and Tower of Power at the now defunct Free Trade Hall (it's now a Radisson hotel).

1975 is a guess as it's the same year as the other Warners review and i assume this gig was the day before!
Artefact added : 5th June 2007
by kifs

chezc Says –
Yes, it was '75 I was at the gig. Little Feat, with Lowell George, in their prime. I remember T of P horns joining the Feat for a rousing version of Spanish Moon and leaving the stage and walking down the aisles still playing. A really memorable night. Chez Cherry
If you'd like to leave a comment, please Login. Login
Manchester Digital Music Archive is licensed under an
Attribution-NonCommercial-ShareAlike 4.0 International License.
Charity no. 1164179
Our archive currently contains 3831 Bands, 752 DJs, 1454 Venues, 303 Industry Professionals and 29440 artefacts contributed by 3987 members.