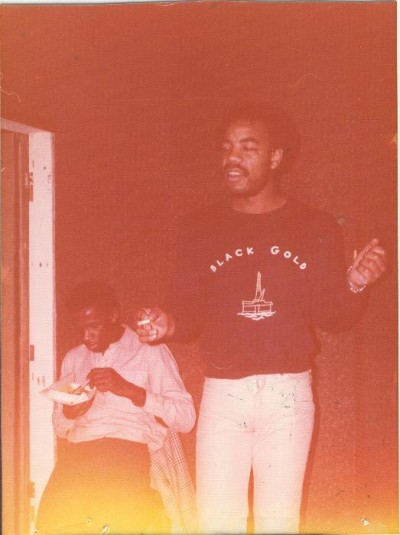 This is a pic of Leroy Smith in Bootleg Studios with Sweet Sensation, Sorry to hear about Leroy passing away, He was a good musician and a great guy and am sure he will be missed by many, My verdict on Leroy? "Seriously underated". RIP

Kevin Says –
Sad to hear about Leroy. He helped out at Revolution in April 1982 during the recording of 41 Degrees album. He was on some Job creation scheme and we had many talks and laughs about his time with Sweet Sensation.

philplatt Says –
Hi Kev, yep, Leroy was a great guy, never knew he did a stint in Revo though, I have been a mate of Andy Macs for many years and done much work with him myself on the good ship Revo, I did a lot of the Who tape tranfers to digital ready for Andy to mix, what an honour, I had the pleasure of hearing lots of the pre count banter which was amazing as I was a big Who fan for years.

I bet not many know this: At the begining of Wont Get Fooled Again' Townshend speaking to Daltry says: 'Can we do it again and get the facker wright this time' Mooney chips in with, E ain't gonna get the facker right anytime cos ee's to busy finkin about his new Volvo!!!

Anyway I digress, I reckon Andy Mac was and still is one of the prime movers within the Manchester music scene, a seriously great engineer who has recorded and produced some great bands, how many other engineers can say they mixed Tommy in Cheadle Hulme!!, I may even start a Revo thread on here as I have done lots of stuff with Andy, ho ho, tales to tell 3 months with Biff Byford,Saxon V The Big Mac with me as ref, yeeeks