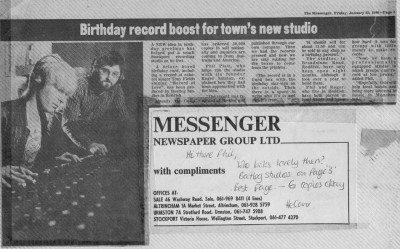 This was prob the worst project I ever worked on, this record was so dire it was funny, It was the brainchild of my business partner Roger, The idea was to give the record to you true love, wife, girlfriend, boyfriend, I only worked on the engineering side of it, READ THIS IT STILL MAKES ME LAUGH EVEN NOW, Once recorded Roger took care of sending it off to London to be pressed up(8000 copies), I went with him to pick them up from Stockport station, on the way there I said to Roger, "What label did you put it on Rog", He replied, "Well the "Bootleg Label" of course, I burst into hysterics and through my tears said, "Your f*****g kidding me arent you" He had not told em at the pressing plant so they would have just used the standard "Famous Bootleg Label", You have to remember I had designed this label for the type of bands I normally recorded, It was 3 hairy legs in a circle (Isle of Man style), in Beano style letters with a big old black boot on the end of each one!!! OMG!! he'd ordered and payed for 8000 records with full colour covers!!, I remember showing Bruce Mitchell one at that night, we both fell on the floor laughing, Needless to say Debenhams didnt want them, Imagine giving one to your girlfriend, "Here you are darling, This is a record of my love for you!! you'd end up wearing the f****r. Hah, I will try find one to add for your amusement.

This tacky record was actually signed up by EMI after this fiasco who later released by Peters and Lee, (Lennie Peters)
PP
Artefact added : 24th February 2009
by philplatt

OT Says –
hi phil - great upload. if you can email us the original scan we may be able to turn it into text as this is a bit too small to read here. thanks.
If you'd like to leave a comment, please Login. Login
Manchester Digital Music Archive is licensed under an
Attribution-NonCommercial-ShareAlike 4.0 International License.
Charity no. 1164179
Our archive currently contains 3728 Bands, 739 DJs, 1409 Venues, 255 Industry Professionals and 27292 artefacts contributed by 3814 members.