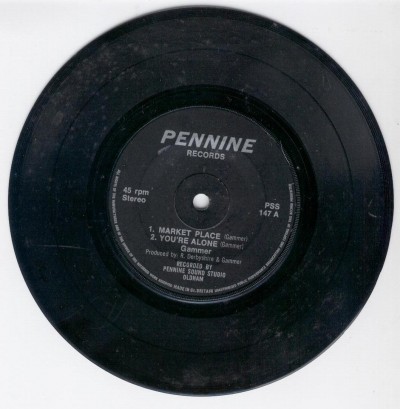 I played guitar and backing vox with Norman Gammer for a good while because I thought he wrote some great songs and we always did at least 3 residences a week, The Champion in Salford, The Pownall in Bramhall and another which slips my mind.
A regular guest guitarist/vocalist was Richard Derbyshire (Later of "Livin In A Box, He played on this single before I joined) he prefered the punking in Manc. than punting at Oxford! during hols, On bass was Ronnie Poole from my own band The Ride and John Cooper Clarke, and a guy on drums called Basher from Oldham who Norman used to sack on Tuesday and reinstate on Wednesday, (No Joke), It served to keep the whole band in a constant state of panic wondering if we would have a drummer for the next gig.

I liked Norman a lot he was a good singer and also played a mean flute, I remember attaching a 12v car headlamp to a pair of motorbike handlebars wired up to a battery charger and giving it to him for his birthday, He loved it and it became a regular feature in our show in his motorbike song, we used to black out the house lights and Norm would shine the beam around the crowd.

les murphy Says –
Great article Phil. I used to watch Gammer at the Champion in Salford on a midweek night and well remember the headlight prop that was used to such good effect. Me and my mates rarely missed Gammer as they were one of the best bands around back then. Thanks for the memories.

Derick.Johnson Says –
I used to work at the Jules Verne Eccles (now the Unicorn) Gammer used play downstairs every Wednesday it was a great night.

philplatt Says –
Hi Les, Glad you enjoyed the article, I used to play with Oorman at the Jules as well, great days and even wednesdays were packed out! Best, Phil

pmal Says –
Hello Phil, happy days.I used to work the lights for the band, the granmore on sunday nights, the champion Salford,and many more.
They were good times.Norman had some of the best musicians Manchester had in those days.Cant you get organise a reunion gig with norman and the familiars. Regards Paul Mallett

Gregg Beaman Says –
Used to watch the band at the Gransmoor on Ashton Old Road in Openshaw.

Gregg Beaman Says –
Used to watch the band at the Gransmoor on Ashton Old Road in Openshaw.
If you'd like to leave a comment, please Login. Login
Manchester Digital Music Archive is licensed under an
Attribution-NonCommercial-ShareAlike 4.0 International License.
Charity no. 1164179
Our archive currently contains 3821 Bands, 748 DJs, 1444 Venues, 302 Industry Professionals and 29228 artefacts contributed by 3965 members.