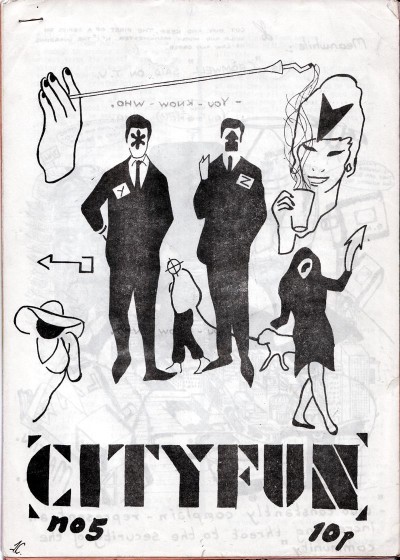 This is the earliest issue of Manchester's venerable City Fun magazine that I own. Number Five. I've approximated the date to March 1979 from the live ads inside. Frustratingly, it's badly-printed in coloured ink on coloured paper, so there's little point in scanning individual pages. As well as the bands listed above, it pretty much touches on everybody who was active in that period.

A4, 10 pages, stapled top-left of cover. Mix of double and single-sided printing.

I've a bunch of other issues and will post them as and when.
Artefact added : 6th March 2009
by Mike

drjohn Says –
I think you're right about the date, Mike - I have Issues 1, 3 and 4, the last of which contains an obituary for Sid Vicious (d 2.2.79), as well as some listings for March, which would make Issue 5 March-April.

Mike Says –
Well, it's been ten long years, but are you still out there, drjohn? I have a question about issue one of City Fun you may be able to answer...
If you'd like to leave a comment, please Login. Login
Manchester Digital Music Archive is licensed under an
Attribution-NonCommercial-ShareAlike 4.0 International License.
Charity no. 1164179
Our archive currently contains 3660 Bands, 724 DJs, 1346 Venues, 234 Industry Professionals and 22139 artefacts contributed by 3611 members.