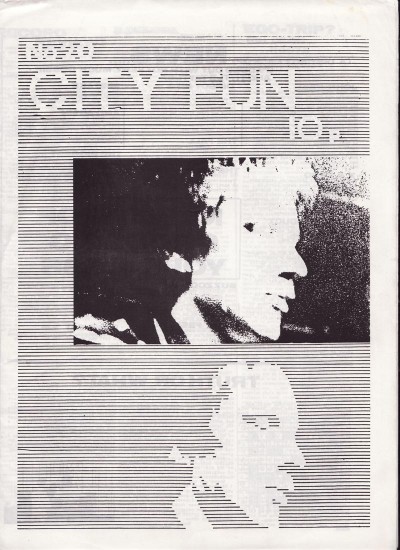 Issue 20 of City Fun from circa March 1980 (there's a letter dated March 3rd 1980 inside) with a review of Fast Cars, Performance and God's Gift in Oldham, record reviews of The Freshies, The Teardrop Explodes and Ludus, a gig guide from March 25th to April 5th and a stop press about the closure of Eric's in Liverpool 'last week', amongst other things.

I realise that this throws up a whole bunch of confusion around the dates for the earlier two issues I've uploaded.
Artefact added : 10th March 2009
by Mike Noon

Mike Noon Says –
I've uploaded a complete scan of this issue in CBR format, which is a full-screen image reader usually used for reading comics and magazines on computer screens. CDisplay Comic Reader can be downloaded, for free, here: www.geocities.com... . This issue can be directly accessed at www.savefile.com/...

kevmills Says –
I was the bass player with Performance for a couple of years, 1980/81, with Phil on vocals, Paul miming, Stefan on guitar, Bernie on drums and the other Phil on keyboards. I could come up with their surnames too, given a bit more time. I remember gigs with Fast Cars, Joy Division, Toyah Wilcox, and a 4am set at Deeply Vale. I remember Tony Wilson coming to hear us at our rehearsal place (at the top of a mill in Oldham) and I remember seeing John Peel dancing at one of our gigs at Manchester Poly. They were fun times. I quit the band "because of musical differences" and was saddened when they split up soon after. I remember Phil (singer) bringing a copy of the band's first single to my flat in Ashton-under-Lyne shortly after the split. Anyway, good memories for me. I left the UK in 1983 and haven't lived there since. ~~~ Kevin Mills.

philc Says –
Performance started as 58 variety and comprised of Stefan on guitar, Phil w on keyboards and Phil c on vocals. We used to draft other musicians in on gig nights. In 79 we put ads in NME etc for drummer and bass and became Performance. Paul did some mime on some of the set and Phil Cs girlfriend at the time did some ballet. As well as the gigs Kev has listed, performance supported the Fall, Fad Gadget, the young marble giants and others. They are on the Unzipping the Abstract album and their demos were played quite often on Transmission, Mark Radcliffe's show on key103. Their 4 track EP cassette obscure object of sold well in a little music outlet in Berlin. They had a photo shoot by Kevin Cumins and had reviews in Sounds on a few occasions.

philc Says –
How are you Kev. Your bass playing was slick, 30 years where did that go?

baytree Says –
I'd like to buy a Performance 7", please! Can anyone help?

philc Says –
The best thing to do is an Internet search of the song title as sometimes the odd vinyl outlets have a copy.

Blank everywhere, I'm afraid. Can you help? Or could you put me (lowdownkids.com) in touch with someone who could?

kevmills Says –
Hi Phil, thanks for the compliment. I'm doing well. After leaving England I worked on cruiseships for a few years, then I spent 20 years in Australia. I'm currently living in Japan. Where DID the last 30 years go???

philc Says –
Great to hear from you Kev. Glad you are well. Still in Uk working at Uni and getting older by the day!
If you'd like to leave a comment, please Login. Login
Manchester Digital Music Archive is licensed under an
Attribution-NonCommercial-ShareAlike 4.0 International License.
Charity no. 1164179
Our archive currently contains 3734 Bands, 739 DJs, 1424 Venues, 260 Industry Professionals and 27774 artefacts contributed by 3845 members.