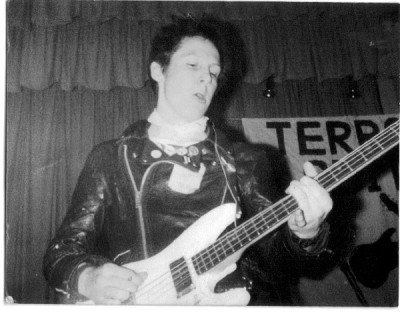 Weaste Lane hall salford - Terrorist guitars were supported by shortlived skinhead oi bad boys the "bouncing checks"- thier bassist dipped out of the gig so the guitarist from TG stood in for them.

TG were due to record a live EP that night and twilight studios (salford) had all the gear setup to record- the support band set ended in a riot with salford skins and casuals throwing chairs and bottles at the stage- It was 1981 and the height of the riot season in salford- the gig was abandoned and the live EP was never made.
Artefact added : 14th March 2009
by buzzlive

Mac Says –
Bouncing Czechs were never an oi/skinhead band and i dont remember them ever playing somewhere called weaste lane hall. As for the riot etc i think you are confusing them for another band.

Says –
Hi- Mac, - the above description is accurate and played gigs around eccles, weaste and also one i think at the mayflower with chron gen or vice squad. see USA punk blog, www.punkrockers.c.... There is a USA band with similar name, bouncingczechs.ho..., and a UK pop band with similar name but spelt differently, had a minor pop hit in 84 i think, en.wikipedia.org/...
- edit

Mac Says –
Sorry mate but I was in the Bouncing Czechs from start to finish and we were never a skinhead band (although I seem to remember the singer had short hair). We did play in Eccles at the Greenbank labour club supporting Terrorist Guitars and did support ChronGen once - we about fourth on the list.
I still do not remember a riot so it may not have been us that were the support band for TG.

Says –
Hi Sean and Seamus definitely had short hair, semus definitely had skinhead, toni just short hair, perhaps skinhead band wrong definition, but deffo an oi type band influenced by the rejects - riot okay, maybe wrong descriptive "gig ruck or what ever you call a mass punch up in a church hall" that ended the gig, if you were playing in the BZs do you remember. The dinner ladies were also around at the time, but they did not play that night - memories fade so cant be certain
- edit

Mac Says –
There was always some sort of trouble at that time but that night does not stand out as any different.
If the dinner ladies were not playing then the were most likely in the audience as we all tried to see TG whenever they played.
Tony was not a band member, he was the brother of Phil who started the band with Sean.

Says –
Tony T was on bass at Green bank labour club, as it was his Bday i recall, then went to drums, certainly played that night, For TG it was a bad night as the gig was halted, hall cleared and police called, and they were due to record a live EP that night and a mobile studio had been brought in by twilight studios to record them and another band who were due to play, but dont recall. It was also the last ever TG gig. Re dinner ladies, Jimmy L, MJ, and Nick were always around at those events, when not doing their own gigs. As you say, always something going on.
- edit 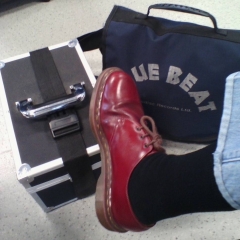