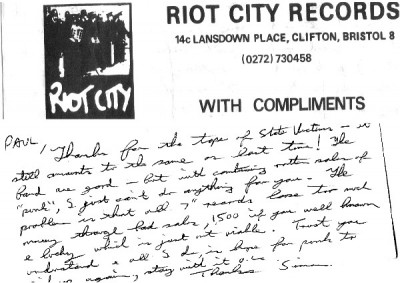 The reply from the record company was an early sign of the begining of the end of the second wave of Oi/Punk as far as 7 inch vinyl sales goes- the letter goes on to say "Even the most well known bands are currently only selling 1500 copies so we have stopped taking on new bands".

But life went on and the punk oi scene carried on strong but dissapeared more underground and evolved into thrash metal and a forerunner of death metal - well perhaps !! By late 1984 the band called it a day. It was fun while it lasted
Artefact added : 14th March 2009
by boy in exile