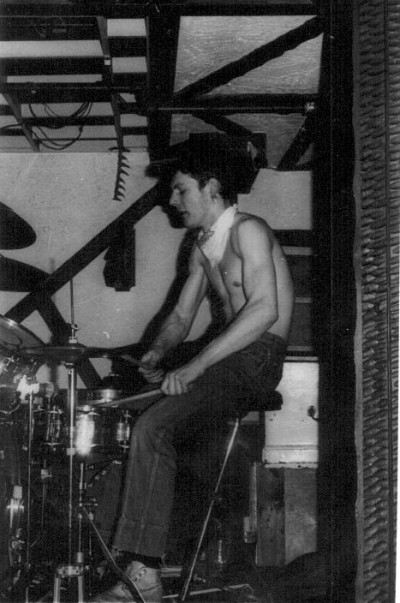 Downstairs at the Cypress Tavern.

Niel went on to form "The Parade" with the drummer from swing out sister and they had a single out "Little Jupiter".
Graham left the band and auditioned for the Chameleons I belive.
Artefact added : 14th March 2009
by buzzlive

Tony/Longfella Says –
Just found a facebook group for the Cyprus at www.facebook.com/... 500 members, lots of pics and memories. I've pointed 'em this way...

cawright1 Says –
My band(s) played with these guys a few times. Sale Annexe I think. Did they have a song alled CID? (CID, CID, FUCK OFF BUGGING ME) ...or was that Corrosive Youth?

Another one was 'Strangeways' - which was a great track.

Johnny Says –
I remember when the idea to form the band first came up, Grahams bedroom in Weaste, listening to SLF and the Ruts.
I lost touch soon after, but good to see they did form.

strangeways Says –
Who's Johnny and what were you doing in my bedroom?

strangeways Says –
Blimey, how you doing fella - nice to see you found our archive!

Johnny Says –
Places like this are my link back to the home country, living between Paris and Moscow, one looses a little bit of the Brit identity.

SD77 Says –
Graham is wearing his Moondogs neckerchief given out free with their 7" single!

strangeways Says –
He he, you got it

SD77 Says –
I still would love to hear some TG recordings. Somebody must have some!
If you'd like to leave a comment, please Login. Login
Manchester Digital Music Archive is licensed under an
Attribution-NonCommercial-ShareAlike 4.0 International License.
Charity no. 1164179
Our archive currently contains 3676 Bands, 737 DJs, 1354 Venues, 239 Industry Professionals and 22353 artefacts contributed by 3637 members.