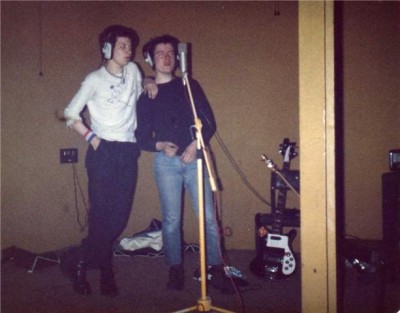 picture showing (l-r) paul and foz from salford punk band "the change" recording 1979 demo...there has been some good stuff recorded at cargo but at the time of this picture the engineer was proud to tell us that the birdy song was done here, which did'nt exactly fill us with hope.

this was sometime in the month of may.
Artefact added : 16th March 2009
by foz

jb Says –
It was after hearing the "Birdy Song" that Factory sent Joy Division into Cargo with Martin Hannett believing that only Hannett could give JD that true "Birdy" feel, you can hear it on "Atmosphere" but probably more famously on Durrutti Column "Sketch for Summer"
Mark E Smith & the Fall recorded in Cargo, Mark was adament that I gave him the full Birdy Song sound treatment and I think we acheived that for him.

Seriously the Birdy Song wasn't recorded at Cargo and if it had been I think I would have kept very quiet about it. John Brierley

foz Says –
ha ha...nice one john you had me going for a second there..i was starting to hear mark e smith in my head going "i'm only a poor little sparrow" in his own dulcet tones....glad to be proved wrong, glad you have a sense of humour and glad you would have kept it quiet...awfull song.

leaves one question...where the hell did i get that from..we did visit a couple of other studio's before coming to yours so maybe there ?? was it recorded in the north west ?? or have i made it up ??.....answers on a postcard to....

jb Says –
Hi Foz,
Don't know if you know but I've put a website about Cargo on line. If you want to take a look it's at www.cargostudios....
If I could have your permission it would be nice to add your photos. jb. john@cargostudios.co.uk

foz Says –
hi john...of course you may have any pictures i have from cargo....consider them sent.

jb Says –
Hi Foz,
Don't know if you've had a look at the Cargo studios website, but there's a myths section, it would be good to add the above story, would that be ok with you?
From the recesses of my mind I seem to recall that Smile Studios out at Chorlton recorded "the Birdy Song", it was, I think, their one claim to fame, if fame is the right word. Did you ever call in at their place?

foz Says –
allright john..
had a good look round cargo site and have seen the myths section..you may of course use the birdy song myth....dont know if we visited smile but it is possible as it was a long time ago when we was very young, and with the lifstyle i've led it's a wonder i can remember anything...e mail'd the pics i have to you at the address you left..hope they reached you..if not give us a shout.

jb Says –
Foz, I can't find your e-mail address, can you send it over got something that may interest you,
john@cargostudios.co.uk

foz Says –
allright john.....dont know what happend with the mail i sent you but here's my address.... ( you got it now) ..if there is any more cyber gremlins then drop a msg here cos they allways get to me.
ps....i'm intrigued.
If you'd like to leave a comment, please Login. Login
Manchester Digital Music Archive is licensed under an
Attribution-NonCommercial-ShareAlike 4.0 International License.
Charity no. 1164179
Our archive currently contains 3861 Bands, 758 DJs, 1458 Venues, 316 Industry Professionals and 29644 artefacts contributed by 4033 members.