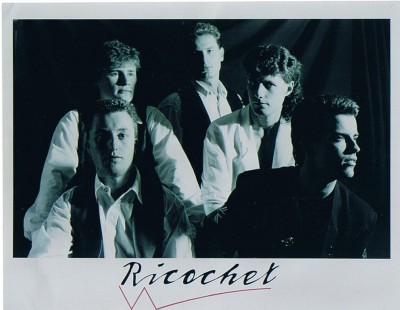 We were a band based in the Denton/Hyde area. Clockwise from the top Billy Myers(v), Simon Bennett(g), Stefan Park(k), Pete Akid(d), Gareth Hamilton(b).
Played all the usual places at that time and had lots of fun doing so. Recorded a few demos and dissolved as bands do.
Billy went on to have some success as "Newton" scoring a few top 5 hits in various parts of the world. I (Simon) now play for DILE, after playing in alsorts of bands inbetween and currently teach guitar. Pete plays for Achtung Baby, the U2 tribute act, Gareth plays in One-eyed Pete (I think) a rock covers band. Stefan as far as I know still hasn't played much since we split.
Artefact added : 8th April 2009
by dile