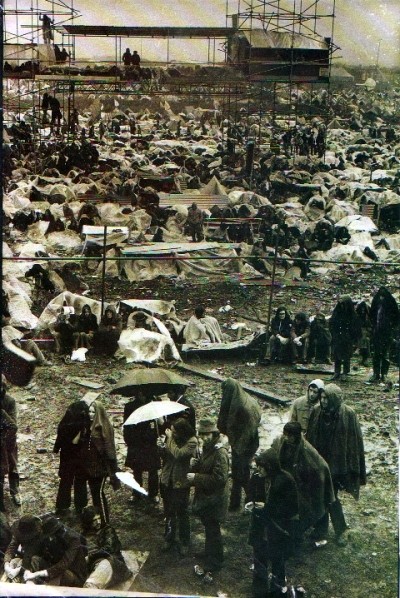 I'm sorry I don't know the origin of this photo, nor the photographer. probably clipped from a magazine article on festivals.
My brother went to the Bickershaw Festival, ( variously known as Wigstock and Mudstock ) he reckoned that there was no provision for food, and that the only Chinese chip shop in the village didn't know what had hit them!
Artefact added : 2nd May 2009
by Alastair

OT Says –
looks like a hell-hole in this pic!

Alastair Says –
Somewher i've got another photo of the stage, with The Grateful Dead in action, and down the front is a young Elvis Costello.
.

bouncy Says –
What a great photo.That's how festivals should be.Reminds me of when I went to Buxton festival circa 1974 when The Faces,Humble Pie and Harry Chapman(Family) played. My first festival.It was wet, then muddy,then very muddy then the Hells Angels came out to play in the mud,everyone got out of the way,then as Harry Chapman Sang 'Here comes the Sun',the sun came out! Magical.

Alastair Says –
Isn't that the one John Peel discusses at great length in his autobiography?

Alastair Says –
I half expect to see another photo with Red Cross parcels being parachuted in. It must have come as a bit of a shock to the Grateful Dead after sunny San Francisco.

bouncy Says –
I'm not sure,I should read JP's book. Maybe if this photo could be coloured in,it would'nt look so much like the WW1 Trenches.

OT Says –
good idea ! anyone got a child that could colour this in and take away the misery?

Alastair Says –
John Blakeney got in touch to tell me about an excellent site devoted to the Bickershaw Festival - www.ukrockfestiva...
read on...
I'm not convinced by your 'WW1 in Colour' approach, Bouncy....a rainy day near Wigan is still pretty much a monochrome affair even today. Can you imagine the weight of all that soaking wet denim, a man could drown out there...
By the way its the 27th anniversary this week!

bouncy Says –
HAPPY BIRTHDAY BICKERSHAW FESTIVAL! Had a quick look at the above mentioned site. Week-end ticket £2.50 bands playing untill 6AM,no curfew in those days,festival lost £60,000.00,no giant fences around then,and no overpriced burger vans either.I like to think that there was a giant pot of veggie stew selling at 25p a portion. No designer wear in sight,apart from Wrangler and Levi,everything else was bought from The Army and Navy Surplus Store. Remember the one in Piccadilly mcr?

Alastair Says –
In the same way Doc Martens fell under 'work wear' and were available from Millets, in black or ox blood red.
Did you ever go to Deeply Vale Festival?

bouncy Says –
No,never been to Deeply Vale or the festival. Visited Wigan Pier recently,but the museum part was closed and there was'nt a lot to see.

Tony/Longfella Says –
Gets my vote for Artefact of the Month!

I think this must have been the inspiration for www.mdmarchive.co...

philplatt Says –
I was at this festival, it was actually a REAL nightmare, it started off a nice sunny day, however Beadle and co had been warned beforehand by local farmers that the weather out there on the moors can turn trecherous in a flash, IT DID, big time, if the photo was in colour it would be a sea of orange, thiese were body leangh plastic sleeping bag covers that someone had the insight to bring and sell for £1 each.

It started to get very dark as these mega black clouds came over, the wind started blowing as the night came on, the band who were playing had to stop as rain started to come down heavy and sweeping across the stage, everyone was trapped up there at the mercy of the elements, tents were no good there were just being blown away, It was freezing, out in the open with an orange plastic bag, me and my mate decided to go to this massive marqee and get shelter in that, needless to say it was packed but all the bodies made it a bit warmer than outside.

We were huddled with our bags tied round our knecks staring are the huge masts holding the marqee up, they were swaying from side to side and then one came down followed by the rest, crashing down across loads of people, (they missed us), we could here screaming and shouting from people under the mast and just general panic, the marqee was now flat on the ground with us all under it, St Johns Ambulace were lifting up the sides and asking if anyone was hurt, (of course there was), the wind was now begining to blow underneath the canvas and lift that.

Me and my mate decided to see if we could find some other shelter, we did, it was a massive flip top bin, like a giant metal pedal bin with swinging lid, we got in that to escape the freezing wind and rain, (Yes that is how bad it was, we huddled in the bin and wondered if we would even survive the night, just as we thought it couldnt get any worse the lid swung back and someone who did not see us threw about a gallon of warm chip fat over us.

We survived till morning when the storm had blown over, it was a sunny morning as we walked back to civilization, I remember an old farmer leaning over his gate saying, "I'm sorry, I'm so sorry,but I warned em about that moor, I rember being glad to be at the train station, stinking of used chip fat and in shock.

This was no picnic, loads of people were taken to hospital with hypothermia, other with injuries, trouble was the emegency services had trouble getting up and down the one track bumpy road, I cannot describe how bad it was but I've tried, by the way if you think that picture looks bad I can tell you that piccy was taken AFTER the storm in the night, It was hell on earth, Beadle should have been arrested for that in my veiw!

People swimming back to their tents!

philplatt Says –
Thanks Tony, I can tell you it was surreal, real bad news, not in my fun book!!
www.philplanet.co.uk

Alastair Says –
Still, at least you got out in the fresh air and enjoyed yourselves! Thank you for an excellent eye witness account,Phil, it must have been awful for you to remember it in such detail. Scarred onto your central nervous system, perhaps.
Maybe the hot chip fat acted as insulation. When German artist Joseph Beuys was in the Luftwaffe in the war, his plane crashed in the Crimea. His body was wrapped in animal fat and felt by the Tatar tribesmen who found him, and nursed him back to health.
Tatar sauce anyone?

philplatt Says –
Hah, cheers Alistair, I just got up oft the floor from laughing, actually you are nearer the truth than you think, we were not really bothered about the chip fat, I certainly remember the chip fat was warm as I was so cold, when you are already in hell whats a bit of warm chip fat between friends. Phil

bouncy Says –
Blimey,what a story,sounds like you were out at sea in a force ten gale! No wonder I hav'nt spotted anyone smiling in the picture.You really had nowhere to go,and what you didn't know was that the black cloud was just over the festival site,everywhere else was fine!

philplatt Says –
Cheers Bouncy, I am afraid smiling was of the menu at Bickershaws breafast, you just have to look at everones faces to see how bad it was, it looks like we all just got nuked, in fact I think we did, anyways I'd sooner be at sea in a force ten gail than be there again, at least you'd have a warm cabin an some fish to go with the oil!! Yeeks I will have nightmares tonight!!, Cheers, Phil
www.darksideofthe...

Phoenix76 Says –
Bickershaw was my first festival, being just turned 17 , the weather was bad, i remember that.
eating beans and other slosh.
"sleeping " in a plastic sheet wrapped round me.
and the mud..THE MUD.

I am very foggy about the artists appearing, and the Bickershaw web site does not help with my memory at all.
your personal memories are great reading.

but what Bickershaw did for me was to give me my first ever hitch-hike, and that feeling when climbing up into the wagon sent me hitching around for the next 16 years.

so i will always have good memories of this festival, even if i only remember the mud and not the sets of the bands/artists.

PLF.
Member of the Society for the Advancement of non-verbal communication.
20 minute jams. and all that.

mr shark Says –
phil platt has got the wrong festival, he's referring to the krumlin festival which was held in 1970 , www.ukrockfestiva...
bickershaw was just wet, no gales or wild weather , just a site that was prone to dampness anyway and then the 20,000 gallon water tank being emptied down the front of the stage after the high diver did his thing didn't help either .

ozit Says –
phil platt as mr shark says- you have it wrong- there are no moors at Bickershaw and the festival you are describing phil plattt on the moors is Krumlin festival near Halifax two years earlier where the famers warned about the gales etc so great that you write such a descriptive paragraph about the gales, the site the farmers warnings etc on the moors but that was Krumlin Halifax in Yorkshire 1970 and nothing to to with Jeremy Beadle 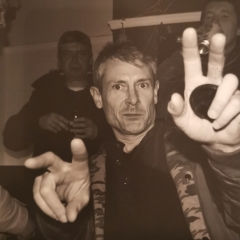 nobby Says –
I was there, went wearing blue suede chelsea boots and came home wearing brown clay clogs. Yes it pissed down every day, but I got to see the Grateful Dead playing Dark Star, and NRPS, the captain and some nob called Tom Mcmaster who got booed off at like 3 in the morning, and when i got back to our tent some wretch had nicked all our food and remaining beer, this on top of, as we approached the site, on the one-track lane, Plod were searching eveyone and my mate hid our big bag of weed in the air filter above the carb. passed scrutiny but as soon as the engine was fired up, said valued content was sucked into carburettor and have you ever tasted petrol-flavoured Durban Poison?

Nightsky Says –
Tom McMaster did not play at 3.00am in the morning, nor was he 'booed off'. He played for about 40 minutes in the afternoon - the second act of the opening session on the Friday.
If you'd like to leave a comment, please Login. Login
Manchester Digital Music Archive is licensed under an
Attribution-NonCommercial-ShareAlike 4.0 International License.
Charity no. 1164179
Our archive currently contains 3715 Bands, 737 DJs, 1380 Venues, 252 Industry Professionals and 26473 artefacts contributed by 3774 members.