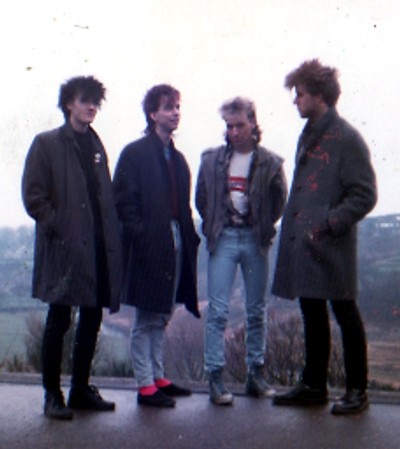 Another ' the Sound of Young Rochdale' photograph.
The band have their eyes set on the future, and their backs to Roch Valley Sewage Works.
We're just outside the garage at Nick the bass player's house where we used to practice.We had a P.A. system ( two Marshall column speakers ) that didn't belong to us, but seemed to do the rounds of several local groups, without ever returning to its rightful owner.
Artefact added : 2nd May 2009
by Alastair

bouncy Says –
If a woman told you that you looked like Guy Garvey,I'm guessing that you're the one on the left. I've been in very cold rehersal rooms,but not very smelly ones.

Alastair Says –
I find bare concrete gives a particular quality to the sound your band makes. Deafening and brutally simple work well in these circumstances. On the right, the big ugly one, if you must know.

Alastair Says –
Another thought occurs to me, I mentioned the PA that did the rounds of several local bands, but as I've said elsewhere we had bits of a drumkit that had belonged to the bloke from Slaughter and the Dogs. Are there other bits of equipment out there that have passed through the hands of more celebrated groups? Do they retain ' the sound' ? Another group I had in Preston, Dwarf Americans, certainly had its sound defined by the crappy old amps we were obliged to use, before the days of retro chic.
I used to wonder about some of the guitars they had in the window of 'The Guitar Player' in Rochdale, or indeed Johnny Roadhouse.

Dedspekta Says –
That's me on the far left unfortunately, apparantly looking like a goth but i never did like that kind of stuff... must have been a wig. I love this photo and had it for many years until i lost it. RIP Martin Lees next to me, committed suicide in New Zealand years ago, never seen Nick for over 24 years. You used to waer that coat at college didn't you Alastair?

Alastair Says –
That coat made it to Berlin in 1987, the city, not the club, with a large yellow burn up the back from it straying too close to the gas fire. people in east Berlin must have thought that we were tramps fleeing the decadent and declining capitalist west. we certainly got some funny looks. Not fashion, just my warmest coat.
If you'd like to leave a comment, please Login. Login
Manchester Digital Music Archive is licensed under an
Attribution-NonCommercial-ShareAlike 4.0 International License.
Charity no. 1164179
Our archive currently contains 3869 Bands, 758 DJs, 1460 Venues, 323 Industry Professionals and 29710 artefacts contributed by 4047 members.