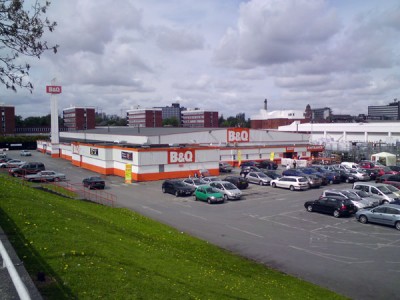 The Hardrock as it stands today - more garden rock and carpet roll these days (sorry). Asyou can tell from the amount of cars, this was taken on a sunday.

I'm told the structure and building are pretty much the same as it was as a venue - does anyone remember what was on top of the tower bit?
Artefact added : 4th May 2009
by OT

OT Says –
its what you make a rockery from...

isweariwasthere Says –
The only thing about the tower I remember is the neon sign "The Village" ,The original entrance was just below this,many a battle took place on that car park, which ultimately closed the venue

isweariwasthere Says –
The venue was originally called the Village/Hardrock on disco night fri/sat it was the Village and for concerts it was Hardrock, there was another in the chain located in Bournemouth

bouncy Says –
I'm sure Morrissey remembered what it looked like as he lived around the corner on Kings Road. Fighting and vandalism caused a lot of venues to close down and there wasn't that many around where bands could play. Most of them were old run down places that had been heavily vandalised by outsiders,not punks! The councils weren't keen on hippies and punks and did nothing to help.I think they wanted everyone to llike ABBA and Brotherhood of Man.I remember going to The Mayflower/Fun house on Sunday afternoons,trying to tidy the place up.The toilets had been heavily vandalised,not by punters.We just wanted bands to have somewhere to play. I remember a huge outcry when Rafters became 'Travolta's Walk' for while in1978!

OT Says –
yes - i saw moz at the cricket ground and he made a comment about playing here, and also about his school - neither of which i can remember!

jsz Says –
not playing there, seeing Bowie or T-Rex there (probably).

jsz Says –
From Morrissey-solo: "He then told a story about how he still had a ticket from 1972 for a New York Dolls concert that should have taken place in the old Hard Rock that is now a B&Q. But their drummer died. "

adge1956 Says –
I thought it was a Statue of Liberty thing - tho' its is a while ago - and I was generally a bit the worse for wear whenever I went there...

jeffreyone Says –
In the early '60s I remember the Hardrock venue as a Top Rank Bowling Alley, we, as Dave Plumb and Stones, used to go now and again as Dave lived nearby. When it became Hardrock later in the '60s I saw Yes, Led Zepp and Purple play there. One side of the place had seats, the other side you sat on the floor, I can vividly remember the strong smell of joss sticks. The tower, from what I can remember, had "Top Rank" in neon lights plastered all over it..

miked Says –
Prior to its days as the Hardrock when it was a bolwing alley (it was originally built as a bowling alley) the tower had a neon bowling ball which worked its way bottom to top and knocked over a neon skittle.