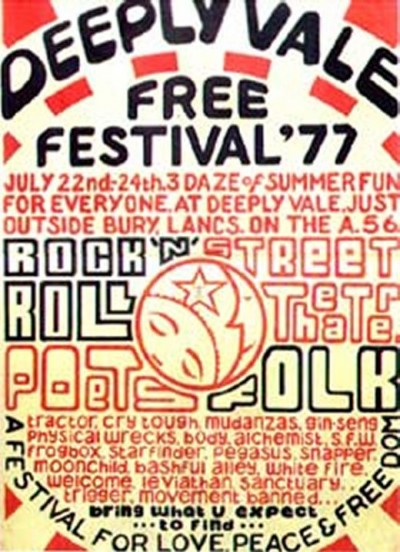 this is the second year of Deeply Vale 1977 and Pegasus featured Andy McCluskey soon to form OMD . Frogbox featured future music journalist Nigel Lord on drums, Nick Ashworth/Nicky Smith on bass and Johnny Sax Wolfenden. Movement Banned contained Rev Mike Huck and Mick Spratt who both went on to form Wigwam Acoustics - This year 1977 the PA was Mitrex Wigwam and Tractor Music combined as most big festivals 77 to 79 were. The Drones played this year but not shown on the poster- they played the previous year as Rockslide. Nirvana featured blind guitar and keyboard legend the late lamented Tony Crabtree
please note deeply vale is a registered trade mark and all images are copyright
Artefact added : 22nd May 2009
by ozit

ozit Says –
cry tough and physical wrecks were both from Whitworth and some members of each eventually formed Beans and the Toasties, aka Local Heroes, aka Victor Mature- they had a single out as Local Heoes - Blast The Pop

isweariwasthere Says –
Nice artefact ozit, Glad you mentioned Nirvana & their blind guitarist (Tony Richardson ??) I followed this band round the Manchester area circa 76/77 what a band !! Last I heard Tony Richardson ?? went solo & signed for Chrysalis Records and released a single 'Sympathy' the old Rare Bird number..after that the trail went dead

ozit Says –
tony crabtree- he died a couple of years ago- there are plans to release some cds of his work- posthumous tributes to Tony are at www.tractor-ozit.com

Alastair Says –
Very sorry to hear that Tony Crabtree died. When I bought my first amp from you (?) at Tractor Music ( an Intermusic Imp ) Tony happened to be in the shop and gave it a good blasting for me. I remember seeing him with Tractor ( the band ) at the Tech. I posted the flyer for this the other day. I have a copy of his single.

ozit Says –
yes he appears on Tractor single Average Mans Hero and Tractor cd Worst Enemies and I have several cds of Tnny's material plus video footage I will upload some images of him got loads here. Intermusic Imp made by the people that made MM mixers- we had an Intermusic demo night at Kimgsway hotel Rochdale with two members of Curved Air- who were split up back then but are back together now.

isweariwasthere Says –
When I posted my original comment (see above) I was hoping to hear that Tony was still gigging, To hear that he passed away has left me gutted,One time I saw Nirvana at the Pheonix on Oxford Rd im sure somebody filmed it ?. R.I.P Tony

dj Says –
Was the last festival in 79 ? because i remember driving to a gathering in about 82 or 83 to see a motley collection of groups and thinking it was Deeply Vale. It was full of bikers and mainly Here and Now types Help!!

ozit Says –
the last good festival in the actual valley that was deeply vale was 1979- ref your Help comment - on the other hand Here and Nowi introduced The Fall and Graham Massey and Alternative TV to wider audiences by their free indoor gigs and appearances at Deeply Vale.. Without Here and Now introducing The Fall at their free gigs then they would not have had the break they needed to get to wider audiences same with Graham Massey and Danny and the Dressmakers - the idea of Deeply Vale 76 to 79 like all festivals was to introduce the audience to a wider musical palete

dj Says –
Thanks for that, i asked for help because i didnt know if it was still classed as a DV festival. Icouldnt agree more about Here and Now. As youngsters listening to and going to see mostly punk bands we always had a soft spot for them. The dj played Floating Anarchy at Strummercamp this weekend, brought back some good memories.

behr Says –
I was a friend of Tony Crabtree or Tony Scott as he was known then and would love to know if there is a grave I can visit. Does anyone know if tony was buried or cremated and if he was buried where ?. Sad loss, great player and great guy. Thanks. Eddy.
If you'd like to leave a comment, please Login. Login
Manchester Digital Music Archive is licensed under an
Attribution-NonCommercial-ShareAlike 4.0 International License.
Charity no. 1164179
Our archive currently contains 3860 Bands, 758 DJs, 1458 Venues, 316 Industry Professionals and 29647 artefacts contributed by 4037 members.